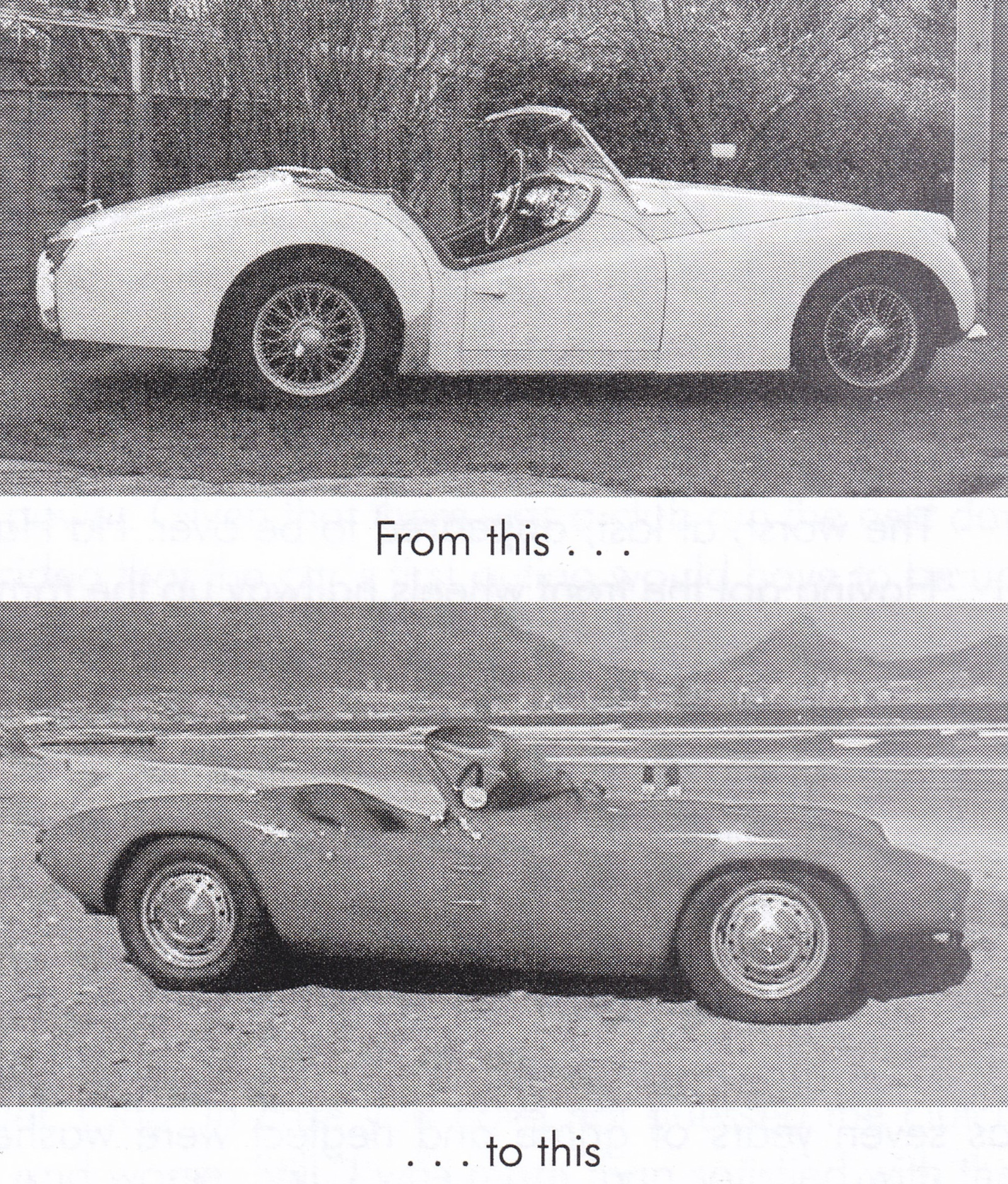 What is an F Type Devin? I hear you ask. Bill Devin was an innovative American who was referred to as "The Enzo Ferrari of Okie Flats". In the 1950s he created glass fibre bodies to be grafted onto various chassis including, among others, the Triumph TR2/3 (the F type Devin). Some 27 different body shells were produced, all looking remarkably similar. The body style was from the little known Scaglietti designed and Fiat powered Ermini sports car, which in turn resembled a miniaturized Ferrari Monza!! The basic body style was adapted, size wise, to suit the relevant chassis application.

My particular car was originally a 1957 TR3, which was raced by a German in South Africa. Apparently the car suffered some terminal body damage resulting from an off track excursion, and the owner decided to replace the original bodywork with a Devin F type. In 1961 a body shell was imported from the USA and Meisner Motors in Cape Town were tasked with mating it to the TR chassis.

Certain modifications were necessary - the chassis was shortened by an unknown amount, and the oil filler on the tappet cover was blanked off and relocated on the SIDE of the tappet cover in order to clear the bonnet. The car then passed on from person to person until approximately 1986, when a major rebuild of the car was carried out, with additional modifications. The most noticeable of these being the fitment of a windscreen, a revised wooden dashboard layout, complete with woodrim steering wheel, and a Citroen radiator with electric cooling fan. The car was then sold on, and moved back to Cape Town. By the time I heard about the car, it had been standing, unused and undriven, barely 10 meters from the corrosive sea air in Table View, for nearly seven years! The wing mirrors had holes in them, the hubcaps were write-offs, the bodywork appeared to be disgusting, three of the four tyres were absolutely flat, the rims were corroded and the boot lock had seized! Closer inspection revealed that the license had last been renewed in 1995!

On the positive side the motor turned, the underpinnings were remarkably rust free and the car had been fitted with a Triumph Chicane overdrive gearbox. Something about the shape of the car excited me - truth be told I always wanted a sidescreen and Ferrari has always been my number one most unaffordable dream car - this way I could get the best of both worlds. So, more out of sympathy for the dejected looking little car than good common sense, offers were made, deals were struck, and suddenly the Devin was mine.

The next challenge was to get it home some 60 kms. No problem, I have a 4.0 litre LDV and trailer with winch - I would trailer it home. Question; how does one get a low slung sports car with 3 flat tyres on to a trailer? Easy you say? - OK, compound the problem by adding seized brakes into the equation and stir with the thought that the car has to be moved from its confined parking bay before the trailer and winch could be brought into operation and that l am accompanied only by a puny wife.

After nearly ten minutes of heaving and grunting, the Devin had not moved one millimeter. The Ford's 4.0 litres were then harnessed to good effect to unceremoniously yank the little car out of its parking area. After seven years of idleness in one spot the car was once again mobile sort of. The left rear brake continued to bind and a black streak of rubber was laid down on the tarmac as the brake refused to give. As one who is sometimes referred to as "Lead Foot" I am accustomed to occasionally leaving rubber on tar - but this is ridiculous! By this time the Devin was positioned so that the trailer could once again be reattached to the Ford and the car winched aboard.

The worst, at least, appeared to be over. Ha Ha.

Having got the front wheels halfway up the ramps the troublesome rear brake partially freed itself and the rear wheel started to rotate. Twenty seconds later the chassis firmly ground itself against the trailer bed and the Devin was well and truly wedged solid. But for the grateful assistance of two patrolling security guards we might still be sitting there. Between the four of us and a conveniently available scaffolding plank, the car was finally manhandled onto the trailer and lashed down. Total time taken to load car onto trailer was 1 hour and 22 minutes.

When we got home, we then had to put air into the tyres and get it off the trailer. Total time taken for this operation 1 minute and 22 seconds. The thing that could once have been described as a battery was removed and we decided to wash and polish the grimy looking beast. Amazingly, as seven years of grime and neglect were washed away a gleaming little Ferrari look alike started to emerge. The simple act of washing and polishing had immediately doubled the value of the purchase price. My good friend, and sidescreen guru, Grahame Johnson came by to see what it was that I had acquired and for the first time in the years that I have known him he was speechless. Once he regained his composure my car become the subject of his genuine praise and admiration. From that point on, it matters not to me what anybody might have to say about this car.

But back to reality. The car now had to be garaged so that its mechanical bits could be attended to. Our driveway is on a bit of an incline and despite there now being air in the tyres the car was still proving difficult to move, the back brake would still be problematic. There was no hope that my wife and I could push it uphlll into the garage. Ah ha, time to prove that grey cells are stronger than pure muscle power. I had a spare Spitfire chassis parked horizontally across the front end of the garage, and with a rope secured around the chassis, another rope around the back axle of the Devin, my chain block and tackle joined the two ropes together and, inch by agonizing inch the car was hauled into the garage.

I now had to establish spark at the ignition system, for which a new battery was required. What a bonus, fitting the battery revealed that everything electrical on the car was working perfectly - right down to the clock on the dashboard. Now, back to the ignition system. The ceramic HT post on the coil crumbled to bits when I tried to extract the (rusted) HT lead. No time to mess about - replace coil, points, condenser, HT leads and spark plugs. We have a spark – we have no fuel as the pump is US. Within 24 hours I had a fuel pump repair kit in my hands, and the rebuilt pump was attached to the block. Ten litres of fresh 97 octane were fed into the cleaned petrol tank and the starter motor button was gingerly pressed. Zilch, nothing but whirring sounds from the starter motor. Check, yes the timing is right, the carbs are full of fuel and the spark plugs are wet with petrol. Off with the tappet cover. Hmm, are all the valve clearances on sidescreen motors supposed to be set at 3000: Thought not- reset properly and try again. One prod on the starter button and the little beauty erupted into vibrant life. No bearing knocks, oil smoke, water leaks or other woes to worry about indeed the carbs and idling did not even need fiddling with. But before I could drive it round the block I had to sort out the brakes!

The front calipers were serviced with new seals and the rear, badly corroded, wheel cylinders were replaced, as well as pads, shoes and one rotten seal and a flexible pipe.

Whilst all of this was going on the rims were sent off for blasting/epoxy coating before being fitted with new tyres all round. A local gent made up new aluminum boot hinges to replace the corroded/broken stock items. Functional they are, pretty they are not!

By 5pm on Saturday afternoon, just two weeks after the purchase date, all the refurbished bits were back on the car, and by 5.30pm the brakes had been bled and it was time for the Devin to make its way forward under its own power. Given that there was a club run the next day and little or no time left to fiddle further, I decided that the car's first outing would have to be up and down Ou Kaapse Weg. If it could survive that it could survive Franschoek. The little beauty ran like clockwork the overdrive proving 100% effective. The only cause for dismay was a slipping clutch whenever power was called for. By slowly building up speed one could get around the problem so the decision was taken to go on the run, perhaps the clutch was due to a bit of oil, and it would burn off? Wishful thinking!

The run showed another cause for dismay. When driven for any extended period at an indicated 80 mph the header tank would spew out approximately 2 litres of water once the car was switched off. On the home run we got caught in a 45 minute traffic jam - max speed 5 mph and the car ran cool and never spewed water. Odd. In case you have not guessed the clutch failed to correct itself and the slip got worse and worse. Still, I was more than satisfied with the car's first outing.

Two weeks after the car's baptism of fire I am happy to report that the clutch plate, pressure plate assembly have been replaced, the water spewing was tracked down to a badly silted radiator (now chemically cleaned and pressure tested) together with the incorrect type of radiator cap.

The maladies suffered on the run are now a thing of the past and the only other addition has been the fitment of a stainless steel exhaust system. The car has subsequently covered many more trouble free miles, although I am now of the opinion that the carbs do need some fiddling with particularly as there is a steady petrol drip from the jet of the front carburettor.

So, from this point forwards we go on to maintenance, with ongoing cosmetic improvements in the medium to long term. Sure, the car is not concours perfect, nor do I wish it to ever be so, and heaven knows here in Cape Town there appears to be a never ending stream of club members who are only too happy to point out every blemish or nick on the paintwork - just in case I might have missed them!

In closing I must say that I have come to love my little beauty - have enjoyed every ride in the Devin that I have had so far, and look forward to many more in the future.

[This was an article in Sabrina, the magazine of the Triumph Sports Car Club of SA. My thanks to editor Ken Boss for permission to reprint this slightly shortened version, and also to Mike for going to the trouble to take the photos especially for this edition. Val McM]