Background
The rear-engine/gearbox mount on the TR7/8 (TKC1044 or TKC2642) often gets bathed in oil. The mount is supposed to (1) hold up the engine/gearbox, (2) isolate the car from engine and gearbox vibration, and (3) isolate the sound coming from the engine and gearbox and exhaust from getting into the cabin. As a vibration and sound insulator, the mount is made from soft rubber, softer than a stock rubber trailing arm bushing. We cut apart and photographed an old original TR8 mount to show you the pieces - the TR7 mount is similar but with softer rubber.

You can see a central wedge-shaped piece of aluminium that mounts to the gearbox in the center, then the surrounding (vibration-isolating) rubber that is bonded to the mounting frame of the mount. The entire mount fits into the cross member which is bolted to the car. (By the way, bonding rubber to the aluminium wedge shaped central piece and the mount frame is not a do-it-yourself process: high temperatures and pressures plus nasty chemicals are involved.) Alas, oil tracks rubber and softens it and will turn rubber into a jello-like mush in time (see below). An oil-soaked, too-soft mount will result in really bad judder as the clutch is let out. The rear of the engine/gearbox actually shifts around when the clutch is engaging; it's not a pleasant experience to drive a car this way. So, replacing an oil-soaked mount is essential for nice crisp clutch action but the new mount should also still be flexible and pliable enough that it does a good job at isolating vibration and noise from the rest of the car.

What is the topic of this article then? Many of us like to resurrect cars and the gearbox mount mentioned above often needs replacing. Replacement is not a hard job, but finding a good mount these days seems to be challenging! Recently, several of us have noted that there's a problem with the mounts we're getting now, and that includes mounts from all the usual suppliers. They fit fine, although the rubber seems hard, but the real problem comes when you start driving the car. For a car with a reasonably quiet stock exhaust you'll notice something immediately after fitting one of these mounts: gear noise, and exhaust noise too (the exhaust is attached to a bracket which bolts to the gearbox). It can actually really howl at times and at certain RPMs.

We started buying up every mount we could get our hands on to see what was available. It seems NOS mounts are now (almost) impossible to find, we were only able to locate one NOS TR7 mount and two NOS Tr8 mounts (Rover "Made in UK" labels on them). Used ones, if you can find any, are generally oil-soaked, we found only a couple of used (but nearly new) mounts on eBay after about a month or two of watching. The mounts we got from our various vendors are now all reproductions and seem to come from two places, Taiwan or India. So, in all, our research team ended up with about a dozen or so different mounts. The plan was to try these out in our cars first, qualitatively compare and note the noise transmitted into the cabin, and then send them out for testing to learn a bit more why these new mounts are so noisy compared with stock. The testing report given here will discuss (1) hardness, (2) composition, (3) construction differences and (4) we'll plot up the measured force-deflection curves to make it easy to compare. Ready?

Hardness testing
In the discussion that follows, it's helpful to know that a rubber band is about 25 Shore A hardness, an ebonite bowling ball is 100 Shore A. So how hard are all these mounts? One slip of paper attached to an old-stock TR7 mount says its hardness was (once) measured at 45 Shore A. That 45 is actually not a ridiculously low number! (We discovered that after talking with fellows who make engine mounts for a living.) We measured hardnesses of 55 and 60 for NOS TR7 and TR8 mounts respectively. The other TR8 NOS mount from the UK was a lot harder 80 Shore A for some reason-age and heat will harden rubber, these won't last forever! The rest, all the ones you can buy today from our vendors, were all generally above 80, depending on where you made the hardness measurement. TSI's mount was an odd one; Ted takes a stock TR7 mount and coats it in a special coating to protect it from the inevitable oil bath. It too, however, has a hardness of around 80. Some (like the Taiwan-made TR8 mount) were nearly 90 Shore A, close to bowling ball hard. Notably, not one of the aftermarket mounts were even close to being as soft as NOS mounts. Furthermore, we suspect that the NOS mounts we found have probably hardened some with age; the originals back in the day when they were "fresh" were probably even softer! That's the first reason all the reproduction mounts you can buy today are noisy, they simply don't absorb the noise and vibration from the gearbox/exhaust like the originals, they just transmit all that noise to the cross member like a mechanic's stethoscope. Let's explore further.

Composition
You can send rubber (and material like it) out for testing to learn about its general composition. A thermal gravimetric analysis (TGA) was done on several of these mounts. The result was a good estimate of the composition of several of our mounts, i.e., the stuff they're made of. The results we got back were enlightening. First of all, the NOS mounts had the usual components you'd expect from a rubber mount, rubber/polymer, some oil, some carbon black and a little ash. Ash, by the way, is not a type of wood or tree species but is any material (e.g. a mineral) that's not rubber. It is probably fair to call anything over about 10% of this stuff "filler". The NOS TR7 mount tested had 9% ash, the NOS TR8 mount and the sample from an original mount we dissected had only 1% ash. These are expected values. In contrast, all of the aftermarket repro mounts had around 30% ash! That much ash is just cheap filler, it does not contribute to the elasticity of the rubber. So around 20% of our repro mounts are filler. No wonder they don't isolate vibration and sound from the cabin! How elastic are these mounts then? How does the filler affect that? To answer these questions, we turned to force-deflection measurements. 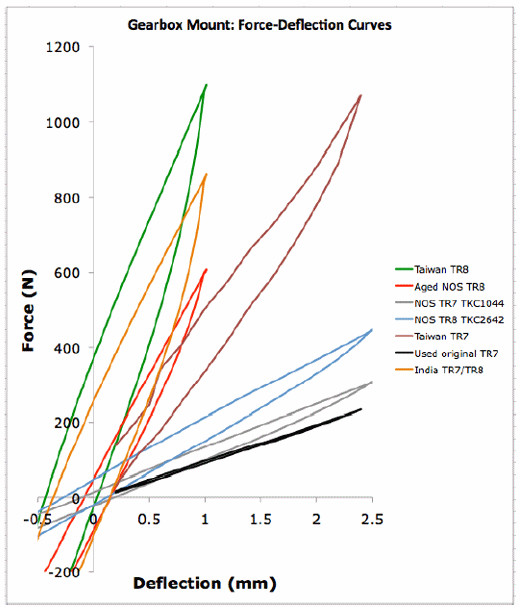 If you put a mount in a machine called a load frame, you can apply a known (calibrated) force and measure how much deflection you get from that force very accurately. Road springs are tested and measured in a similar way. We actually had deflections measured in a couple of Instron load frames for a whole cycle of forces applied to our mounts during compression (positive downward force) and tension (upward force). Here we'll show just the compression data since the mount is mostly under compression with the weight of the gearbox; the tension results are similar. We plotted all these results up together on the same plot to make it easy to compare and the results are shown in the plot.

A pure linear spring will plot up as a straight line on a force-deflection curve and the slope will tell you how stiff the spring is. A very soft spring will yield a gentle upward slope (to the right here) on its force-deflection curve, a very stiff spring will give you a steep slope. If you examine the plots, you'll see that the "softest" mount is a lightly-used TR7 mount we found on eBay and the stiffest is a Taiwan TR8 mount. The Taiwan TR7 and TR8 mounts are nearly 10 times stiffer that the NOS TR7 and NOS Tr8 mount respectively. Wow! Hard and very stiff mounts do a lousy job of isolating vibration and sound. Additionally the Taiwan mount exhibits hysteresis, a time-dependant behaviour that makes the displacement curve for increasing force different than the curve for decreasing force. Hysteresis is something you do not want in a mount, yet several we tested had it. In contrast, the rubber with low ash content had minimal to no hysteresis. The softest TR7 mount measured has no hysteresis at all. It's pretty obvious that the reproduction mounts are much stiffer than stock and we're guessing that the large amount of filler used has a strong effect on the force-deflection curves. Not only do we see time dependant behaviour, we're hypothesizing that the filler makes the mounts a lot harder and much stiffer. Neither are good for isolating noise.

Finally we cut a few of these apart. There was an earlier TWOA webpage built with some detailed photos of the differences so we'll not include those here. We note that NOS mounts have far less rubber in several places when compared with the repro mounts too.

However, we have a photo to share with you too. We chose a new India mount to dissect and an original TR8 mount. (The construction of the Taiwan TR7 and NOS Tr7 mounts appears identical to the India TR8 and NOS TR8 mounts respectively.) Interestingly, the original wedge-shaped piece (left in photo) from the mount center of a NOS mount is actually just a simple block of aluminium in a repro mount (right in photo)! On one repro mount it was painted and machined to look like it might be a wedge-shaped piece but it's just a rectangular block. You can imagine that the shape of the insert (which is what bolts to the gearbox) affects how the force is transmitted to the rubber of the mount. The originals push the rubber down and out so they use some combination of compression and shear forces, the reproductions only push downwards (shear force only). We cannot imagine the reproduction mounts have the durability of the originals with this design.

Conclusions
The repro mounts we buy today are all too hard, too stiff and have notable construction differences. We suspect the extra 20% filler we found is to blame and perhaps the shape of the insert as well. We're hoping we can work with our vendors to see if this unfortunate state of affairs can be remedied. Stay tuned!