Giovanni Michelotti is well known in Triumph circles. He created the Triumph 2000 design, both in Mk 1 and Mk 2 guise, the Stag, the small saloons of the 1300, 1500, Toledo and Dolomite. He designed the TR4 and TR5 as well as the GT6 and the Spitfire. Michelotti had opened his own design studio in Turin in 1949, and started by taking on work for other well-known design houses such as Vignale, Bertone and Ghia. His connection began with Triumph in 1957, the same year that a Dr Salvatore Ruffino bought the Italian distribution rights for Standard-Triumph. The Michelotti connection with Triumph was to last for almost twenty years. Michelotti had a reputation for working best under tight schedules, and could come up with a sketch for a new car in half an hour.

Besides distributing the cars of Standard-Triumph, Dr Ruffino harboured a wish to build a sports car and had initially approached Zagato for designs. When this proved fruitless a meeting was arranged with Michelotti a year later. He provided various sketches, one of which was to become the Triumph Italia 2000GT. Soon after this work, Michelotti produced the competition TRS, the 'ZOOM' prototype, and the initial drawings for the TR4.

Vignale had surplus capacity and close contacts to Michelotti, so the cars were produced there on an assembly line owned by Dr. Ruffino. Originally some 1,000 cars were planned, but with the financial difficulties that Standard Triumph faced in 1960 and the impending launch of the TR4, which was considered as a competitor to the Italia, the numbers fell. Ruffino was of course Standard-Triumph's Italian distributor and was thus able to ensure that the Italian dealerships could carry the car. However the change in Triumph's ownership meant that he was unable to break into the all important U.S. and European markets. An independent dealer in Massachusetts imported the Italia, where it was known as the Italia 2000. The only external reference to Triumph was a badge on the rear wings. Without the world-wide distribution, and having to face supply difficulties, production continued until 1962. By this time the increased competition from the cheaper TR4 caused the Italia to fade away. It is sad that the change of ownership and problems with the British motor industry caused the premature demise of this car. Despite the let downs from Triumph, Dr Ruffino remained a Triumph dealer, and continued with his automotive interests before retiring. He died 15 years ago.

The Italia production cars showed up some problems with stability that were remedied by the installation of a front anti-roll bar, stiffer shock absorbers and up-rated rear springs with an extra seventh leaf. Standard-Triumph recognised this as a production car and not just a modified car by adding an "I" to the serial number of all engines destined for the Italia. In addition a special section was included in the TR3 Production Specification book that listed all the changes to the chassis. 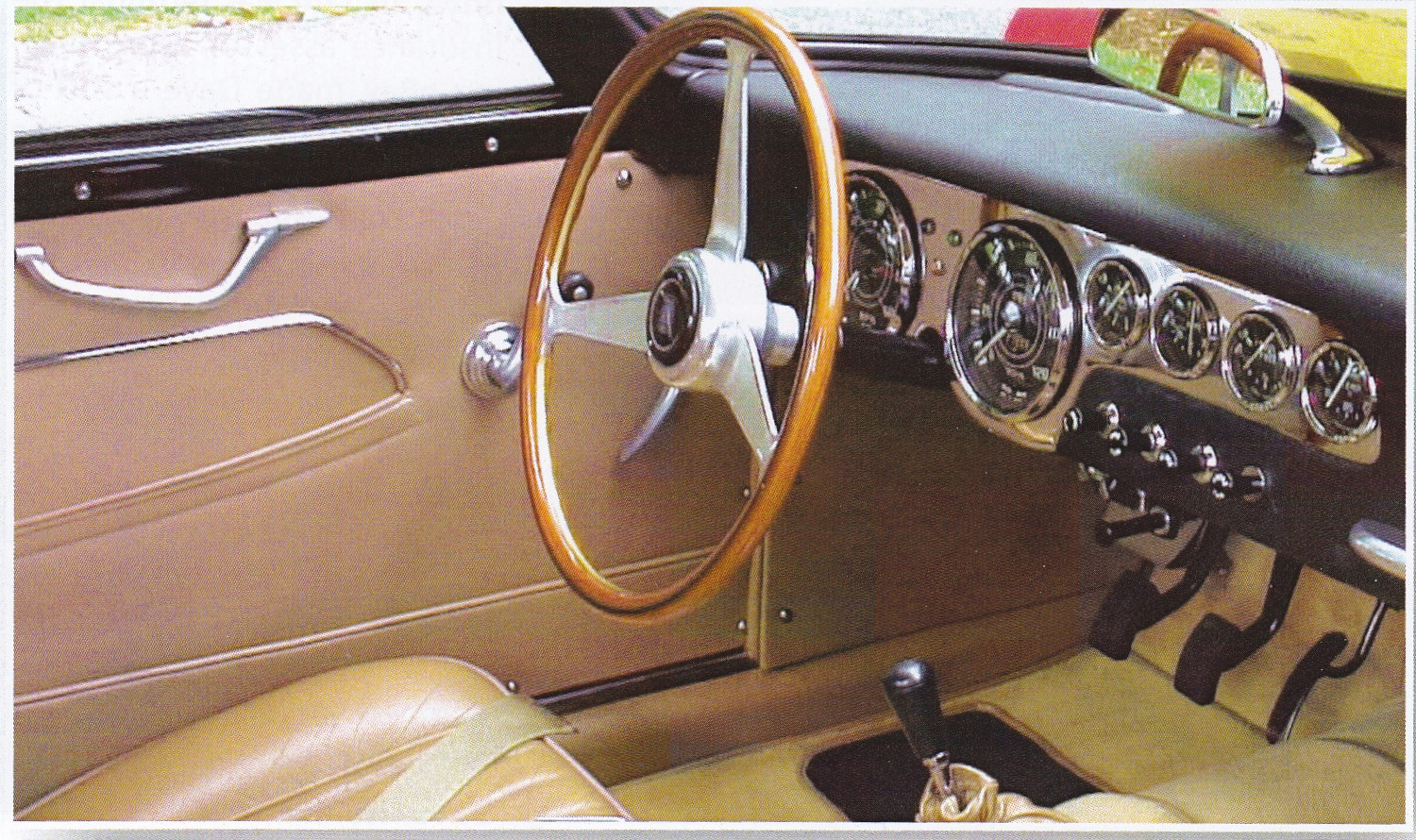 The Italia is an elegant combination of British engineering and Italian artistry that used the entire TR3 chassis and drivetrain, with some small modifications. Over 300 of this stylish variant were sold although as with most Triumphs precise numbers are extremely hard to ascertain. It was only ever made as a coupe, there had never been any plans to make it a convertible, (the same as the TR7, although that did lose its roof eventually!). Unlike many of the other early Triumphs that had wings bolted on, those on the Italia are a part of the main body. The last thirty production cars were based on the TR3B.

The large amount of glass (impossible to source now) helps to give an impression of space in the interior although the placing of the rear seat means that only small "bambinos" can be accommodated. Instrumentation is taken straight from the TR3, but a few luxury (for those days!) features were added. These included a folding footrest for the passenger, a map light under the dash and a cigar lighter. Most cars had a vinyl interior although a leather interior was an option. Other options include an alternative steering wheel, wire wheels, and Weber carburettors plus most of the accessories that came with the TR3, courtesy of a local Triumph dealer. The production colours were varied, the car could also be painted to order.

There were some differences in springs and suspension, depending on the date of production. Most parts were from the TR3 but the radiator was of Italian origin. Early cars had a similar fuelling arrangement to that of a TR3 (from inside the boot). Later cars had an external fuel cap leading to a tank that sits where the spare tyre was. The spare actually fits into the tank, giving later versions of this car one of the more unusual fuel tanks used.

The engine used in the Italia is the same Standard-Vanguard 1991cc engine as used in the TR3. Many came with overdrive - the switch for this was located on the lower part of the dashboard. The result was a car whose performance lagged slightly behind that of the TR3, but the improved aerodynamics and lighter weight gave it a higher top speed. At the end of the 1950s the first Italia was tested at MIRA where it acquitted itself very well, lapping at just under 110 mph. It is hardly surprising that as the majority of cars were sold in Italy or the USA, that the vast majority of Italias had left hand drive.