SPORTS CAR LOVERS, rejoice! The reorganization of British Leyland in the last half of 1978 has resulted in some very positive steps, to wit, the Triumph TR7 Convertible, the TR8 and an updating of the Jaguar sedans, now called Series III. The British manufacturing conglomerate has been going through a variety of painful and costly shuffling, strikes, and sales valleys for the past several years and has only been through massive infusions of British government capital that the company has been able to stay afloat. There is, however, every expectation that a turnaround is being accomplished through a combination of hard headed management and improved production and products. The automotive division is now known as BL Ltd and this is further broken down into Jaguar-Rover-Triumph Ltd and Austin-Morris Ltd, JRT, as the insiders call it, is getting the bulk of the attention because of the unveiling of the long-awaited Triumph TR7 Convertible and the TR8 coupe with the 3.5-liter aluminium V-8 engine, plus the continued success of the Rover 3500 which was named European Car of the Year in 1977. Add to that a restyled and refined Jaguar and it's clear that the people at JRT are deadly serious about making the new triumvirate work and show a profit. And that is why I found myself in England with a group of 20 other American, Canadian, Australian and Japanese journalists anxious to see and drive the new cars from BL Ltd.

FRANKLY we were getting rather exasperated about ever having a chance to see, let alone drive, the TR7 Convertible- and British Leyland Motors Inc., the US arm of the firm, was obviously getting just as impatient as we were. Finance and labour problems delayed the car's scheduled introduction for about a year but barring any last-minute catastrophes, it will be on sale in the U.S. by July 1-and it's been worth the wait.

When the TR7 was introduced in 1975 (R&T, April 1975), it came as a coupe because during its gestation period it seemed that U.S. lawmakers were going to ban convertibles from American highways. Fortunately, that never came to pass but it was too late for Triumph to redesign the car. The coupe's wedge-shape styling was quite controversial and it's still a car that people generally have a strong opinion about, with few taking a neutral stance. I must admit that I'm one of those who has never been especially keen on the appearance, and it's quite a surprise, therefore to find myself very enthusiastic about the styling of the TR7 Convertible. It simply looks right-it's what the car should have been all along, with a clean, crisp shape that evokes notions of speed and sports car driving excitement. 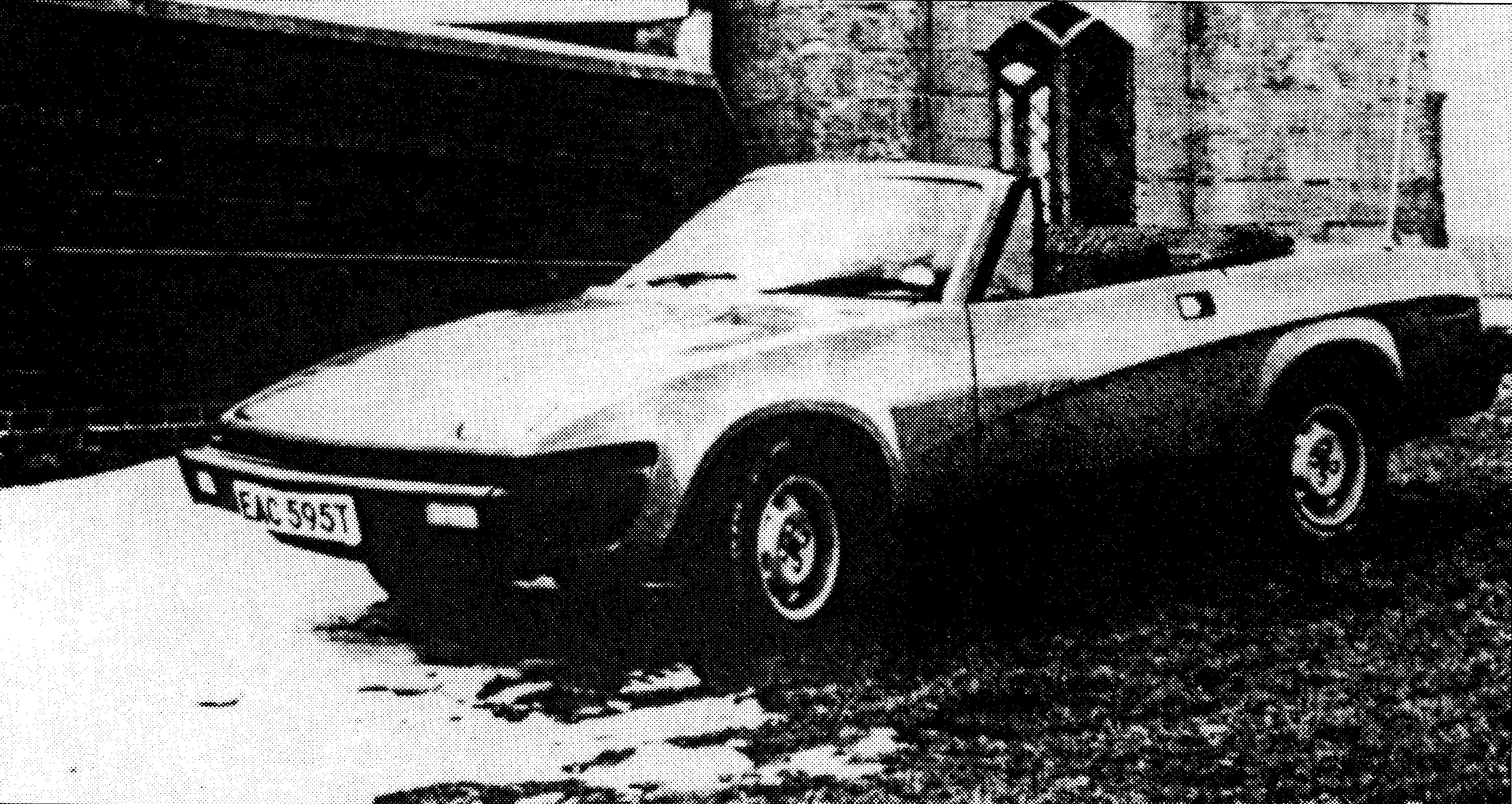 Because the coupe body has remarkable torsional stiffness, converting the TR7 to an open car didn't require extensive redesign. The suspension mountings and the front crossmember were strengthened, and a box-member crossing behind the seats and a panel running the width of the body beneath the rear deck (eliminating a small storage space found in the coupe version) provide additional stiffening. Also, the windshield frame is beefier, enhancing torsional rigidity and keeping the driving compartment taut and rattle-free.

Visible changes are limited to a new-look steering wheel minus the large center pod, and the rear deck is completely new-eliminating the raised character line that starts at the rear roof pillar and flows into the deck and fender. The result is a much cleaner wedge shape with a smooth beltline from stem to stern, especially pronounced when the roadster's top is down of course.

When the top is up, nearly everyone who sees it comments on how much it looks like the Mercedes-Benz 450SL convertible top, particularly from the rear, and when you're in the business of marketing cars, there's nothing wrong with that. By British standards, raising and lowering the unit is fairly simple, but not as easy as the single step top of the Fiat 2000.

Driving the TR7 Convertible is virtually the same as driving the coupe, except that now you can be out in the open, where every right-thinking sports car owner should want to be! The smooth wedge body and raked windshield reduce wind buffeting to a nearly undetectable level, even at highway speeds, and the structural rigidity is immediately apparent when you hit the first bit of rough pavement- no squeaks or rattles. It was also pleasing to discover that on a cold winter day in England, I could enjoy alfresco motoring in relative comfort thanks to the lack of wind in the passenger compartment and the efficiency of the car's heater.

With the top raised, the fit was nearly perfect except for a slight bowing out at the top of each side window. There wasn't any rush of air through the small opening and wind noise at 60 mph was noticeable but not obtrusive. Clearly, the Triumph engineers did their homework in producing this ragtop.

NOW HERE'S one for the performance -oriented enthusiast. Take a TR7 coupe, slide in the Rover (nee Buick) 3.5-litre V-8 engine, add power-assisted steering (standard), lower the car nearly a full inch, alter the spring rates and shock absorber valving, beef up the chassis, and you've got a high-performance sports car worthy of the name. That's what Triumph has done and the TR8 is scheduled to go on sale along with the TR7 Convertible in July. And that's not all the good news - if everything goes according to schedule, there will be a TR8 Convertible model in the U.S. by October or November.

The TR8 concept is bound to stir memories of the Sunbeam Tiger of the Sixties, but the Triumph is a much more civilized car with braking, steering and handling characteristics designed to mate with the V-8 engine's performance capabilities. My initial impressions of the TR8 are that it is quick, responsive and fun to drive-and that it can be enjoyed right up to the limit. Canadian broadcast journalist and race driver Jacques Duval and I shared the TR8 for our limited driving time near Donington race track, and we agreed that it handles superbly right up to the limit of adhesion, but once past that point, it could be dodgy getting it back under control because of the short wheelbase and the high speeds at which corners can be taken We did not, however, have the opportunity to put our theory to the test because we were on public roads in the only U S.- specification TR8 available for driving impressions.

The power-assisted rack-and-pinion steering has quick and light response but retains reasonably good road feel. Triumph uses a General Motors Saginaw power-steering pump and an Adwest rack; the combination works well and the driver can exercise a light touch on the wheel without feeling that all feedback has been damped out of the system.

All in all, the TR8 is an impressive sports car with exciting performance and one that we're anxious to put through our normal road test procedures. Handling has always been excellent with the TR7, and now that there's some additional power to complement it, the combination could be exhilarating. Like the TR7, the 8-cylinder model will be equipped with a 5-speed manual transmission or an optional 3-speed automatic.