Triumphs and the "O" Series Engine

In 1971 the need for a project to develop a B-Series engine replacement was instigated. It was felt that an OHC version of the B-Series, sporting an aluminium cylinder head and displacing 2-litres would deliver more than enough power and torque to outgun the B-Series, even in "anti-smog" guise. Throughout 1972, work continued, and projected (gross) power figures were reported as 112-115bhp for B-OHC, compared with 106bhp for the 2-litre B-OHV and 96bhp for the existing standard MGB unit. By September 1972, the design for the prototype engines was pretty much finalised. By the autumn of 1972, the O-Series name was formally applied to the B-OHC, and it marked the point in time when the final link with the original B series engine was removed.

Between 1972 and 1978, two things remained constant - the MGB's O-Series conversion had become a running issue within the company, especially when viewed alongside long-term TR7 plans. The second factor was that the O-Series would be used in the front wheel drive Princess and the rear wheel drive Marina. The only question was - when.

The first production car to use the O-Series arrived in 1978 - and that was the Marina. Sadly, plans for offering the O-Series in 1.6 and 2 Litre form was scuppered by the cost advantages of using 2 Litre version's head casting on the smaller unit, raising the capacity to the unusual size of 1.7 Litres. Advantages over the B-Series unit were a lower all-up weight, but in terms of refinement and performance, the motoring press found little to get excited about. 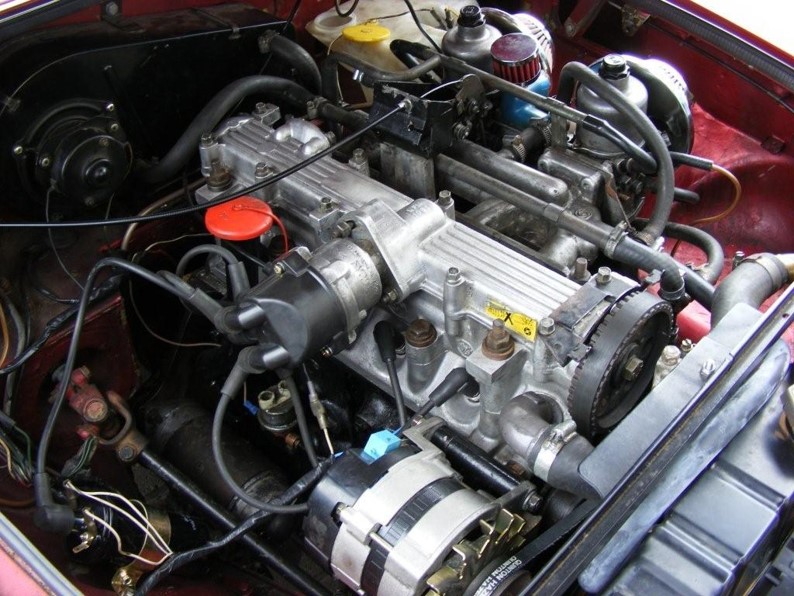 Shortly afterwards, the O-Series Princess 2 appeared - and this was the first showing of the larger 2 Litre version. The 1994cc unit produced a less than sparkling 93bhp at 4900rpm in single carburettor form, and did nothing to improve the Princess reputation with buyers for being a slow car.

That is not to say that the O-Series was without its merits; only that it was a bit of a "rough diamond" in the early years, offering little advantage over the outgoing B Series - certainly in terms of performance and refinement. As stated though, it was a good 20kgs lighter than the B Series engine, and the block was shorter and therefore easier to package. Also, the aluminium cylinder head allowed for unleaded fuel usage. 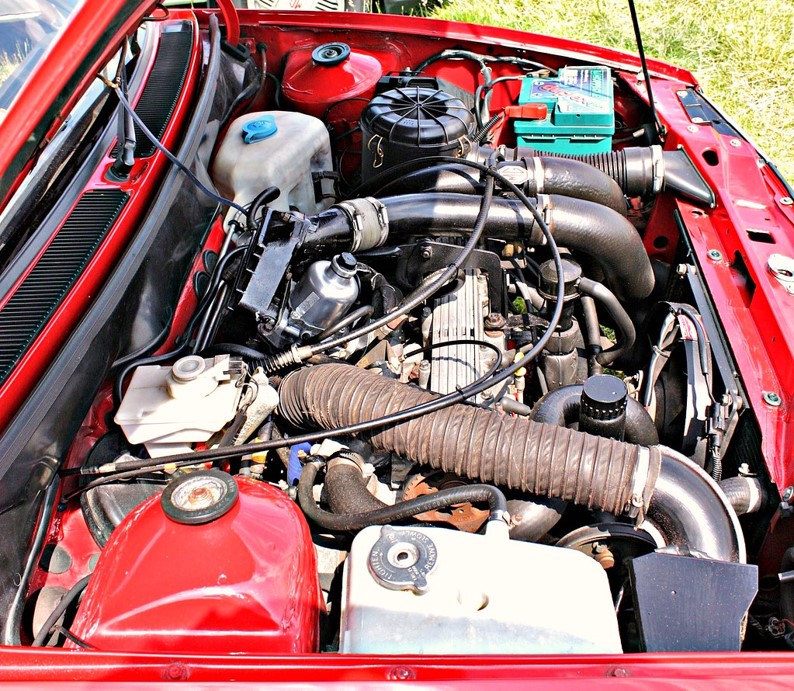 It was also usefully reliable.

In 1980, the first rear wheel drive 2 Litre O-Series powered car appeared: the Ital 2.0 Automatic. In 1982, a 2 Litre twin carb version was installed under the Rover SD1's sleek bonnet, and then in transverse form in the Ambassador. In 1984, it appeared in the Montego and Maestro with an end-on Honda designed gearbox (and very effective it was, too) - so there was no doubt that the O-Series was an adaptable engine.

Of course, the O-Series story did not finish with the Maestro and Montego - and after an intensive development programme during the mid-1980s, it was transformed into the twin-cam 16V M-Series....

Fundamentally, the O-Series was a good engine, and if nothing else, it demonstrated that, when asked, BL could get the job done in the most trying of circumstances. Perhaps, it was launched when in need of final development, but given the lack of resources available to BL at the time, it is a miracle that it appeared at all.

So, where did the TR7 figure in the development of the "O" series? Although the TR7 was axed before production could begin it underwent a great deal of development work as the following will show.

This consisted of 25 cars of which 20 were fully built up driving vehicles, and 5 partially built cars.

This was BL's last-ditch attempt to keep the TR7 viable. Rationalizing engines would have driven build cost down, and it also promised increased performance (the O Series TR7 Turbo car was marginally faster regarding lap speed but slower on the flying 1/4 mile than the "tweaked" UK spec TR8 at the MIRA test track).

This was a serious project. With all thoughts of a 'Sprint' 16 valve TR7 long since buried by this stage (not a single 16 valve car was on the fleet at this time) and the 2-valve engine running out of development potential, Triumph (BL) needed a new engine for the TR7.

That takes care of the twenty or so running cars. It might be noticed the high survival rate of cars that were supposedly scrapped in June 1981. In most cases the scrapping got no further than the removal of the running gear prior to sale. Having now checked the DVLA website on these survivors most of them appear to have been retro fitted with V8's. Whether this was done at the factory, or after sale to BL employees is not certain. One of the BL engineers who bought at least two of the above, still has one sat engineless in his workshop to this day, having never moved since the day it was delivered! A good proportion of the survivors that started life as LHD cars now appear to have been converted to RHD. A couple of these cars that have been seen in the flesh bear no evidence of ever being LHD which leads one to suspect that there was a fair degree of bodyshell swapping going on in the department. Some of the cars seemed to have escaped less paperwork (log books) and then been utilised in the rebuilds of lesser TR7's. It should be a fairly easy job to trace these cars back to their correct identity bearing in mind the wide spread of colours, and specifications used in the fleet.

There were also at least 3 unregistered cars (all Convertibles) that were used in crash tests.

One notable absentee from this list is the Broadside DHC which was also fitted with the "O" series engine showing that B.L. were looking to the future. This car can still be seen at Gaydon.

The major difference when fitting the "O" series engine, was the subframe. This, in fact was a TR7 frame with modifications. Very few of these exist today but one of our members photographed his to compare it with the standard TR7 frame and the TR8 frame. 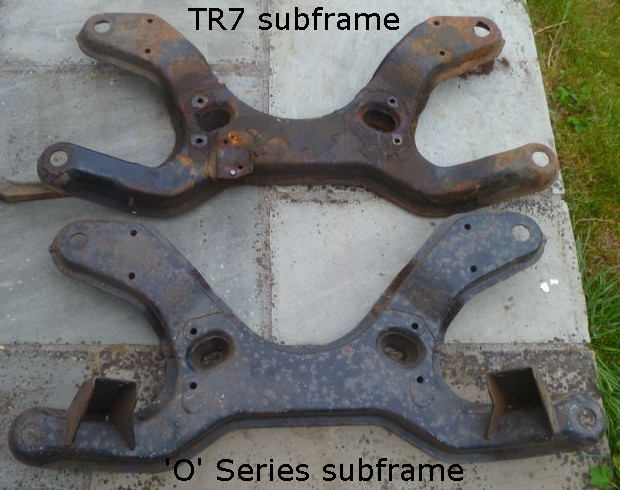 Sadly, the project was dropped when TR7 production was halted in October 1981 so we will never know how it would have handled particularly in Turboed form.

My thanks to Canley Classics for allowing me to reproduce details of the Development Fleet and to Simon Godrich for rescuing the "O" series sub frame.