How many Monza Red or Cavalry Blue cars were produced? How many fuel-injected TR7 Spiders were made? What's a PED VIN car? How many cars were fuel-injected? The TWOA receive similar questions quite often and whilst records are sometimes too sparse to know precisely, with a little detective work we can sometimes learn more than what's generally known. This is one of those detective stories, and we think it answers one of the most commonly asked questions: how many 1980 fuel-injected TR8s were built for the California market - I have two such cars - and, more generally, how many fuel-injected TR8s were built worldwide in total?

There are a couple of published sources of production numbers out there, one is Bill Piggott's Original Triumph TR7 &TR8 (2000) and another is the older William Kimberley's Complete Guide to the Triumph TR7 and TR8 (1981). While there are certainly errors to be found in both books, they are good starting places for research like this. Additionally, several years ago UK enthusiast Richard Connew spent a couple of days at the British Motor Industry Heritage Trust going through all the 1981 model year records looking at individual cards - like the ones shown below - and carefully making notes of all the information he could find on the 1981/1982 TR8s.We all owe Richard a debt of gratitude for the many hours and hours and hours spent doing that! 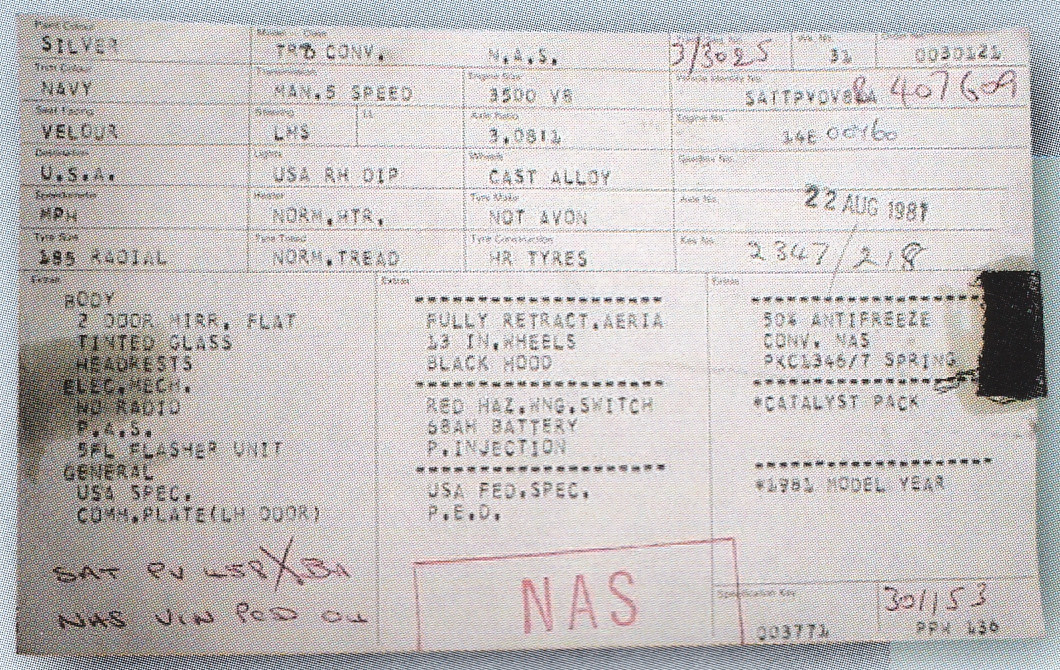 So, let's see what we know about the fuel-injected and TR8 production numbers from the above sources.

In nice round numbers (nearest twenty-five or so), there were approximately four hundred 1981 TR8s shipped outside the UK and all were fuel injected. The few genuine UK TR8s had carburettors. Total TR8 production is generally thought to be between 2750 and 2800 vehicles. Let's use round numbers and assume that 2800 TR8s were made worldwide. From the sources cited in Joe Mahoney's article last TWOA newsletter we know there were approximately four hundred TR8 coupes produced in 77-79/80. That leaves circa two thousand TR8s produced for the 1980 model year.

We also know that all the 1980 California cars - both TR7s and TR8s - needed to be fuel-injected to meet the stricter Californian emission standards. So, the big question. How many TR8s went to California in the first year? 5%? 30%? Until now only a few people would have even been in a position to make an educated guess. We asked Mike Cook (VTR) to see if Triumph sales might have an idea of how many - or even what percentage - of cars were destined for the Californian market that first year; with little success.

Now comes the real detective work! We've recently learned that the Canley factory initially ordered from Lucas 800 fuel injection systems for the TR8s. Ah hah! So, if all those fuel injection systems were built and delivered, that would put an upper limit on the number of fuel injected cars built in 1980. Remember that production moved to Solihull for 1981. But 800 fuel injected cars out of a production run of 2000? That's more than one-in-three TR8s built specifically for California. Not too likely - but let's continue. Another clue can be found deep within the membership files of the old TR8CCA and now the TWOA. Of the records we have, when you compare the numbers of 1980 TPZ...cars (CA fuel-injected TR8s) to the 1980 TPV... cars (49-State carburettor TR8s), you find that roughly 20% are fuel-injected. However, the best clue of all can be found in Richard Connew's records of the 1981 TR8s.

The engine numbers of the fuel-injected cars all began with 14E (the cars with manual transmission) or 15E for the handful supplied with automatic transmission. The highest engine number ever found was 14E00799, a Silverleaf car built on 12th October 81 and reported by David Huddleson. Richard's own car is a PED car with engine #760, whilst my January 1980 California fuel-injected car has engine #44 and Brian Ridley-Jones, in the UK, has engine #14E00002 in one of his cars, shown below. So the engine numbers also suggest there were around 800 total fuel-injected engines, again, give or take a few. Now we're getting close! 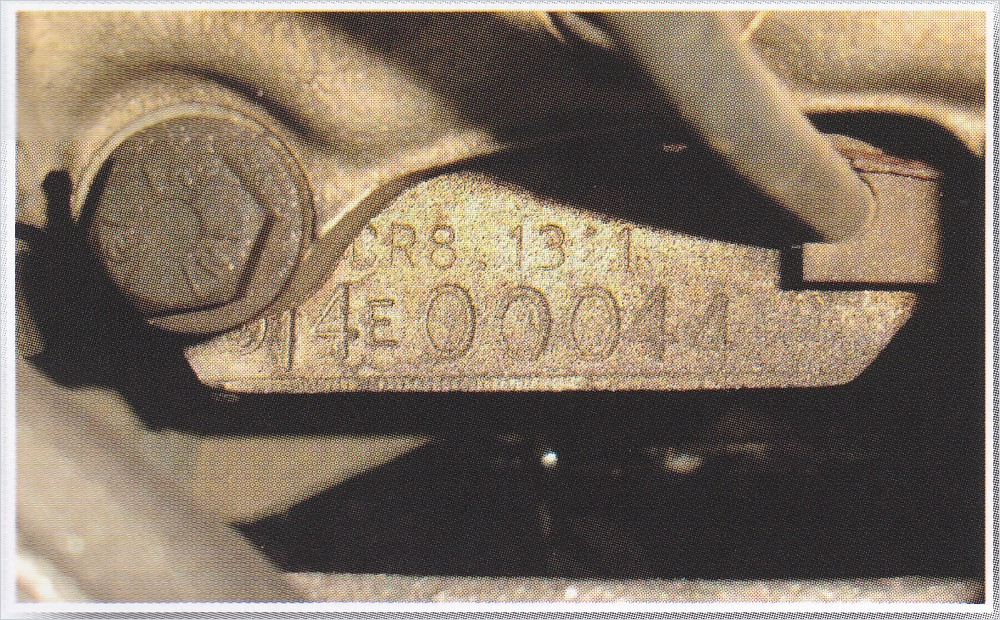 Were all the engine numbers used? The records from 1981 suggest that the answer is 'probable'. The records of cars and engines look as if the engines were brought out in batches and then the cars built - nothing too strict about numbers or sequencing, it seems it was a case of grabbing another FI engine and putting it in - but it certainly looks as if most of the numbers were used.

Conclusion? In nice round numbers, about 800 fuel-injected TR8s were built before the factory shut down. Cool, eh?

There are still mysteries like this out there. Mysteries like 'how many fuel-injected TR7s were built?' and 'why did they use two different ECUs?' What about those PED cars - vehicles sold to US servicemen and then exported back to the USA (and there were some that never left the UK and some that actually came back to the UK). Got any questions you'd like to know the answer to? Write us! We love a good mystery.

Finally, if you'd like a 'Heritage Certificate' for your car you can get them from the British Motor Industry Heritage Trust http://www. heritage-motor-centre.co.uk/exhibitions/archive-services. It's pretty cool to have a 'birth certificate' for your car. The one issued for my brother's 1975 TR7 actually advises what ship the car came over on!