Like other manufacturers of the day, British Leyland was always looking for clever new ways to market their cars, and the TR7 was no exception. Over the life of the TR7 there were six different 'Special Editions' offered - not including the Sprint development cars or theTR8s.

The Victory Edition was marketed in 1976 with a unique set of white six-spoke wheels, special stripes and a black vinyl top. A word of caution should you find one for sale however. The wheels were recalled under British Leyland campaign A999 as over time they were found to develop cracks, and although you may still find a set of original wheels they may be unsafe for use. At the beginning of the campaign the wheels were shipped from the manufacturer to BL at Coventry for standard testing, which was completed without issue. During the campaign the company that made the wheels was sold to new owners and the quality of the steel was changed, resulting in the failures. 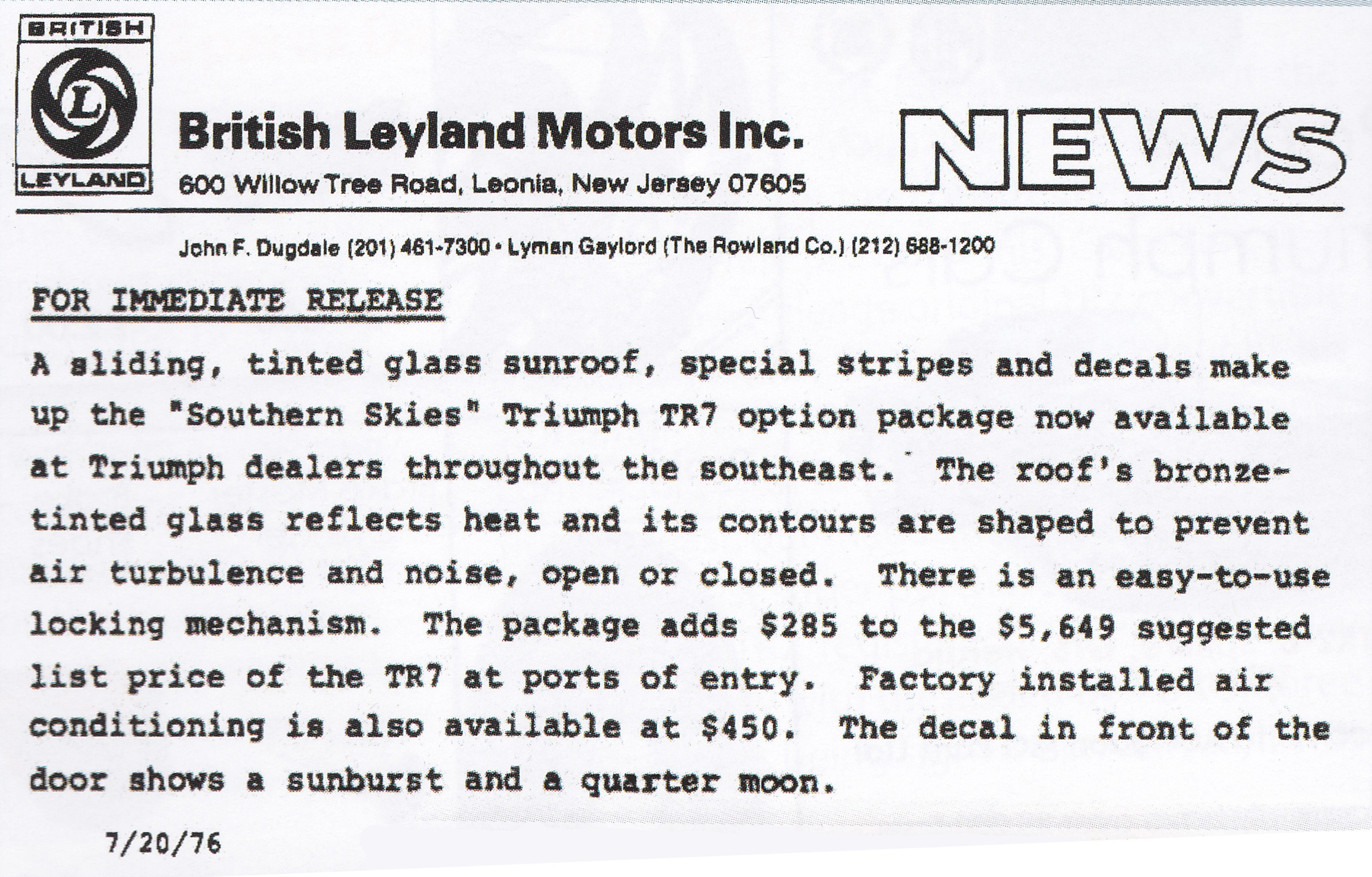 In 1977 Triumph offered the Jubilee Edition, with racing stripes and TR decals on the doors. This was a UK-only car, produced for Queen Elizabeth's Silver Jubilee. Three years later [in 1980] came the Anniversary Edition - a great idea except that no one was really sure what anniversary was being celebrated! This model was only available as a Drop Head and had a special steering wheel from Moto-Lita, factory-fitted floor mats, a commemorative plaque and an AM/FM cassette-player.

The Premium Edition, offered in 1979, was prepped for the coupe models. This was black car with silver stripes and decals, and was a Rest-Of-The-World only car.

The TR7 Spider, a convertible with a special black paint, red decals, air conditioning, and alloy wheels was also offered in 1980. These vehicles are now quite sought after by collectors and a number of examples are known to exist.

The Coca-Cola / Levi's cars - Not so much a Special Edition but an ultra-rare coupe painted Coca-Cola red with the unique white Coke Ribbon logo flowing along both sides and trimmed using Levi's denim fabric inside. The cars came with Wolfrace wheels, air conditioning, and had a refrigerator mounted in the boot. Three cars were awarded as prizes in a competition run by Coca-Cola, two of which are known to survive. For the unfortunate runners-up, Levi donated five hundred pair of jeans. Another one-off Special was given away around 1981 as a prize in a competition run by Wilkinson-Sword. A Drop Head with a distinctive red\black paint combination, this car also survives.

But before them all there was the Southern Skies TR7. This was never an official Leyland factory model, but is nonetheless unique. 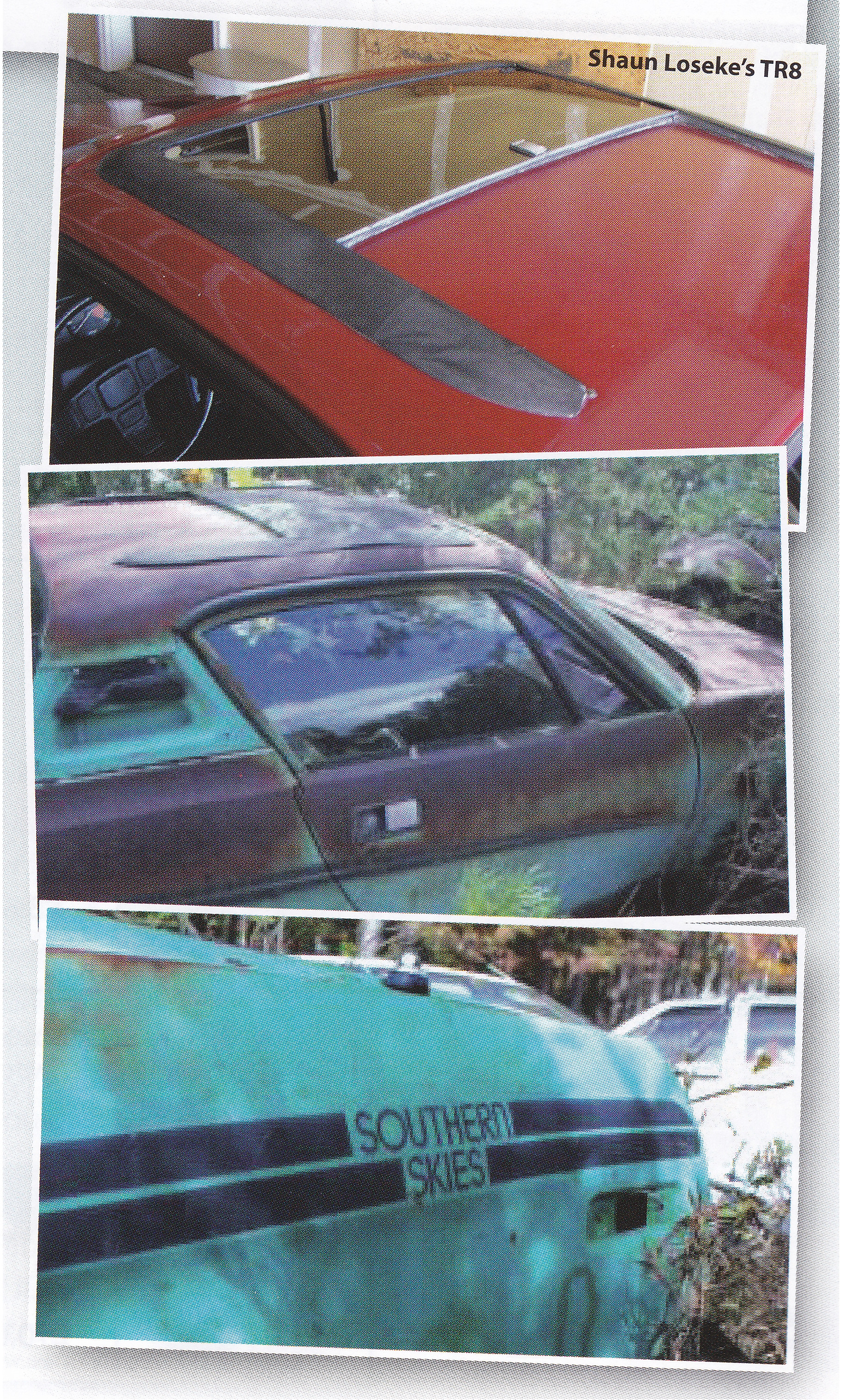 The bespoke decal set for the Southern Skies car consisted of two stripes running the swage line with the words Southern Skies in block text on the rear quarter panel, and a round Sun-and-Moon logo on the wing just in front of the doors. Because the specific package was managed out of the regional offices there are no sales figures available. Michael Cook, VP of Sales in Leonia, NJ has commented that 'quite a few cars were sold'- but whether this means one hundred, five hundred or even one thousand cars we'll never know.

TWOA member Shawn Loseke used to have a TR8 with this particular sunroof installed. The roof had been installed at the port of entry in Jacksonville, Florida. This would make distributing the Southern Skies models easier as the South Eastern Zone offices were located in Jacksonville. Installation was performed by the sunroof manufacturer's factory representatives.

Though unusual, Shawn Loseke's car was delivered with both the sunroof and the luggage rack already installed. The sunroof itself was not bespoke to Triumph. Manufactured by SkyTrends [from 1976 through to 1980] it was used by a number of different automobile manufacturers and the product was manufactured to be installed by dealers as both OEM and aftermarket variants. SkyTrends was ultimately purchased by the American Sunroof Corporation (ASC). Today, no parts are available new for the SkyTrends 'top slider' style of sunroof.

The Southern Skies cars are now very rare and it's unknown if any are still roadworthy. There's one vehicle known to be residing in a North Carolina salvage yard, and when last seen in autumn 2011 it was in very poor condition. lt may be available for purchase but as projects go it's not one for the faint of heart....

Shawn Loseke's red TR8 was completely destroyed earlier this year in the forest fires that swept through parts of the USA. With a bitter twist of irony, the car was in a workshop having accident damage repaired when the workshop itself was engulfed in the fires.