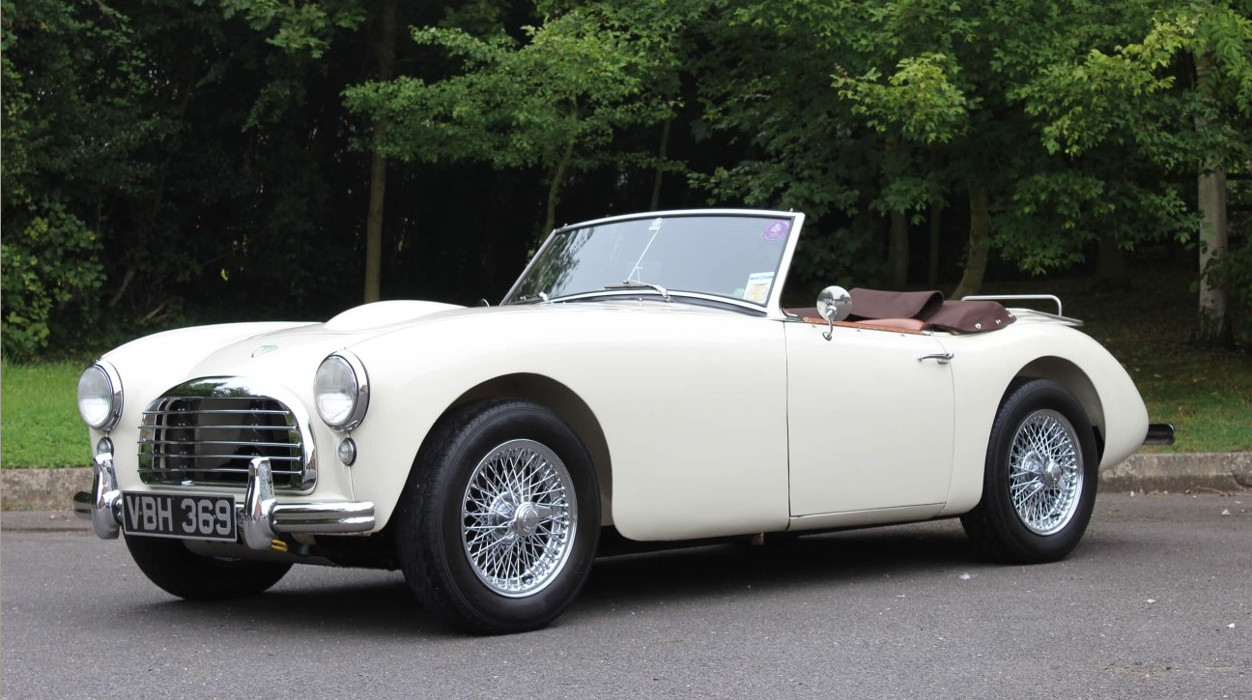 I think the Swallow Doretti is quite the prettiest TR based derivative that has ever been produced. It is one of those cars, which seems to me to have always been around but I cannot recall a time from my misspent youth where someone I knew or lived near to, actually owned one. Imagine my surprise when carrying out this research that only about 275-300 were built. The Doretti was introduced in the Autumn of 1954 and was built by The Swallow Coachbuilding Company who built motor cycle side-cars, and were based at Walsall Airport in the West Midlands. They were a descendant of William Lyons' old pre-Jaguar company which at the time was owned by Tube-Investments.

The design was the concept of a coach-builder named Eric Saunders. Following a visit to California in July of 1952 he felt that there was a market for sports cars, at the right price, as was already being demonstrated by the Austin-Healy 100 and was about to be demonstrated by the TR2 and of course more so by the TR3A at a later date. Saunders design concept was based on a tubular frame chassis of similar layout to the TR2 but of rather more advanced design and was used fairly extensively on sports racing cars of the time providing a stiffer frame. The cruciform was not needed as the chassis had an MG-style scuttle hoop and outriggers with a second hoop just in front of and lower than the final drive. Radius arms were fitted to the rear suspension in order to reduce the rear end hop on the TR. The front suspension with strengthened lower links was mounted on tubular cross members. This layout resulted in a chassis that was 7 inches longer and 5.5 inches wider than the TR2 which gave the car a considerably smoother ride. The drive train was direct TR2, using a virtually standard engine at 1991 cc linked to the TR2 gearbox, and rear axle bought in from Triumph.

The engine was mounted further back in the car making it even more intrusive into the cockpit and making use of the TR2 splined drive shaft. The relocation of the engine enabled a virtual 50/50 weight distribution. The body was designed by one F. G. Rainbow with an Italian influence which showed through on the front Ferrari-style grille which was to influence the TR3, the body being built by Swallow who had considerable experience in the aircraft industry. The rear of the car is very like that of the Austin Healey. The body was constructed from an inner skin of 22 swg steel welded to the chassis for additional strength, unlike the TR2 body which was bolted to the chassis, with the outer panels being made from 16 swg alloy being bolted on. The car was just one inch longer than the TR2 at 12ft 8ins but unfortunately offered smaller accommodation in both the interior and boot. The interior of the car was extremely dated having an upright driving position in keeping with cars of the thirties with narrower doors than those of the TR2 and as long as a long door TR2. The dash layout used the central pod of the TR2 but the Rev counter and Speedometer were mounted to the left and right of the pod presumably to ease changeovers for the left-hand drive market and influenced no doubt by that of the Morris Minor.

The complete car was built to an extremely high standard having a totally up-market appeal as was the price tag at £1,102.00 compared with the TR2 at the time at £910.00. The name of the car came from a lady named Dorothy Dean who was Triumph's distributor for Southern California and by all accounts was a stunning blond. The performance of the car was not quite as good as that of the TR2 with a top speed of marginally over the ton and a 0-60 time of 12.3 seconds and returning 27.9 mpg (TR2 = 103 mph; 11 .9 secs and 33 mpg) but it does weigh in slightly heavier.

There were high hopes for the car particularly on the West Coast of America but following Sir John Black's accident, production of the car ceased in 1955. Just before production of the car ceased a 'one off' fixed head coupe was built. The location of 178 world-wide is known today, which is an impressive survival rate. Undoubtedly the main factor for lack of sales of the car was down to poor accommodation in both the cockpit and boot, and of course the relatively high price.