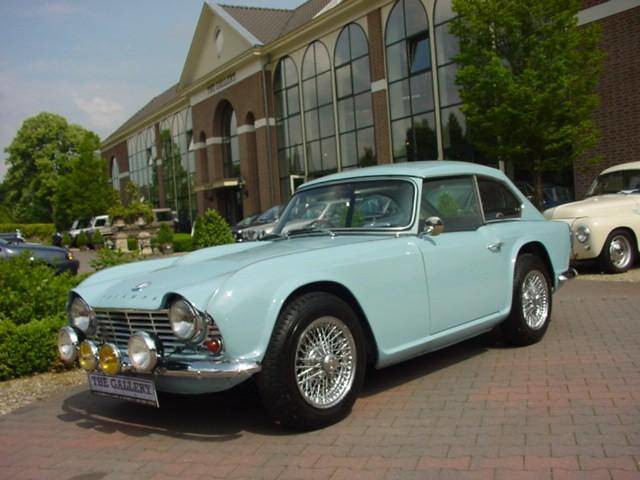 Now to get off on the right foot. The name of this particular TR variant has an accent over the 'e' so it is actually pronounced 'Dovey' but no one ever does. A bit like that posh French soap which fills the bathroom with lather at the drop of a hat or maybe even a drop of water! The Dove was produced with similar thoughts as to those used in the production of the Swallow Doretti covered in the issue before last but not in such an ambitious manner. The car was built by a coachbuilding company with experience in producing the Harrington Alpine. This was a luxurious fastback version of the Sunbeam Alpine produced in 1961 and became an immediate success and so Thomas Harrington of Hove in Sussex looked for another successful sports car upon which they could work their magic, or so they thought. At that time Standard-Triumph had too many problems of their own (as always) to market the car themselves and so an agreement was reached with Standard-Triumph distributors L.F. Dove of Wimbledon, South of London ( that's right where those blasted Womble things live) hence the name with the accent to make it a bit posh like.

The GT 4R was intended to be a cheaper and more easily maintained version of the then defunct Aston-Martin DB3 and was designed to carry two adults, children and their luggage rapidly over great distances, as was the Harrington Alpine. The body of the car was based on the TR4 and from the windscreen forwards was exactly the same, with the same doors and basically the same rear GTR4 Dove, (Photo circa 1989) wings. From the windscreen backwards however a modified roof was fitted which sloped down towards the rear of the car but the roof was so designed so as to give a little more headroom which resulted in a rather a sharpish angle to the rear tailgate. In spite of the increased headroom the distance between the rear seat squab and the roof was a mere 2ft Bins which meant that your kids in the back could not be very old!

The appearance of the 'fastback' could be said to be a bit lumpy but the design gave a reasonable boot area with a lift up panel into which was built a fairly extensive tool kit but as always in order to gain access to same required the removal of one's luggage first. Beneath the tool kit panel a redesigned 15 gallon fuel tank was housed. This gave the car increased range and was mounted so that the spare wheel slid in beneath it The rear panel of the car was a smartly designed unit, which had obviously been carefully detailed to blend in with the rest of the car, unlike many of the variants built before and after. The internal trim of the car was basically as the TR4 but was to a higher quality in keeping with the car's desired image.

The Dove was fitted with overdrive as standard and had a balanced engine and gas flowed head; this gave it a much smoother operation than the TR4 but did little to enhance the performance figures. The Dove needed 11.2 seconds to get to 60mph and 17.9 seconds to cover the standing quarter mile. The superior nature of its aerodynamics enabled the car to reach the ton in 43.6 seconds and an 80-100 mph acceleration time of 16.5 seconds against a figure of 25.4 seconds for the TR4 in standard trim. Fuel consumption was in the region of 25-30 mpg, which compared very favourably with the TR4 at 23mpg. For some reason, the recommended maximum rev limit was 5000 rpm which 'restricted' the car to 106mph, (I can't imagine any true blooded TR driver taking heed of that), but one test report of the time indicates a maximum of 108mph against 102mph for the TR4. Regrettably the car did not have the appeal of the MGB GT and at £1250, compared to the TR4 at a little under £1000, was not the most attractively priced vehicle at the time.

These cars are an extremely rare sight, only 50 or so were built. Their demise was added to because the Rootes group, who produced the Sunbeam Alpine, persuaded Harrington to stop making them, but quite why this and the price were not sorted out beforehand remains a mystery which is something we lovers of the TR marque have got quite used to. The photographs which I have loaned Val McEditor to go with this article are of a car which belonged to a former Club member, who lives or lived in the Sheffield area. He exhibited it at the Manchester Classic Car show about ten or twelve years ago, on the TRDC stand. If my memory serves me correctly, he sold the car on but if anyone has any knowledge of either the car or it's former owner then please give me a call. Also former Club Chairman Talbot Field used to own one. Interestingly enough the coachbuilding firm of Harringtons was taken over by a Rootes owned company named Robins and Day who are still around, but I can't remember whether they are a Peugeot dealership or a car leasing company.