I've had my 1971 US-Specification TR6 for some twenty-three years now and it's been an ownership that can only be summed up as a joy! I'm one of those owners that likes to keep the car as standard as possible. I'm in awe of some of the modifications that other owners do to the TR6, with wonderful interiors and sports-modified engines and running gear. These mods can elevate theTR6 to another level of TR motoring, but I prefer to try and stick with what rolled out of the factory ... a bit of motoring from 60's/70's! So, with that in mind, why am I writing about fitting electronic ignition to my TR6? 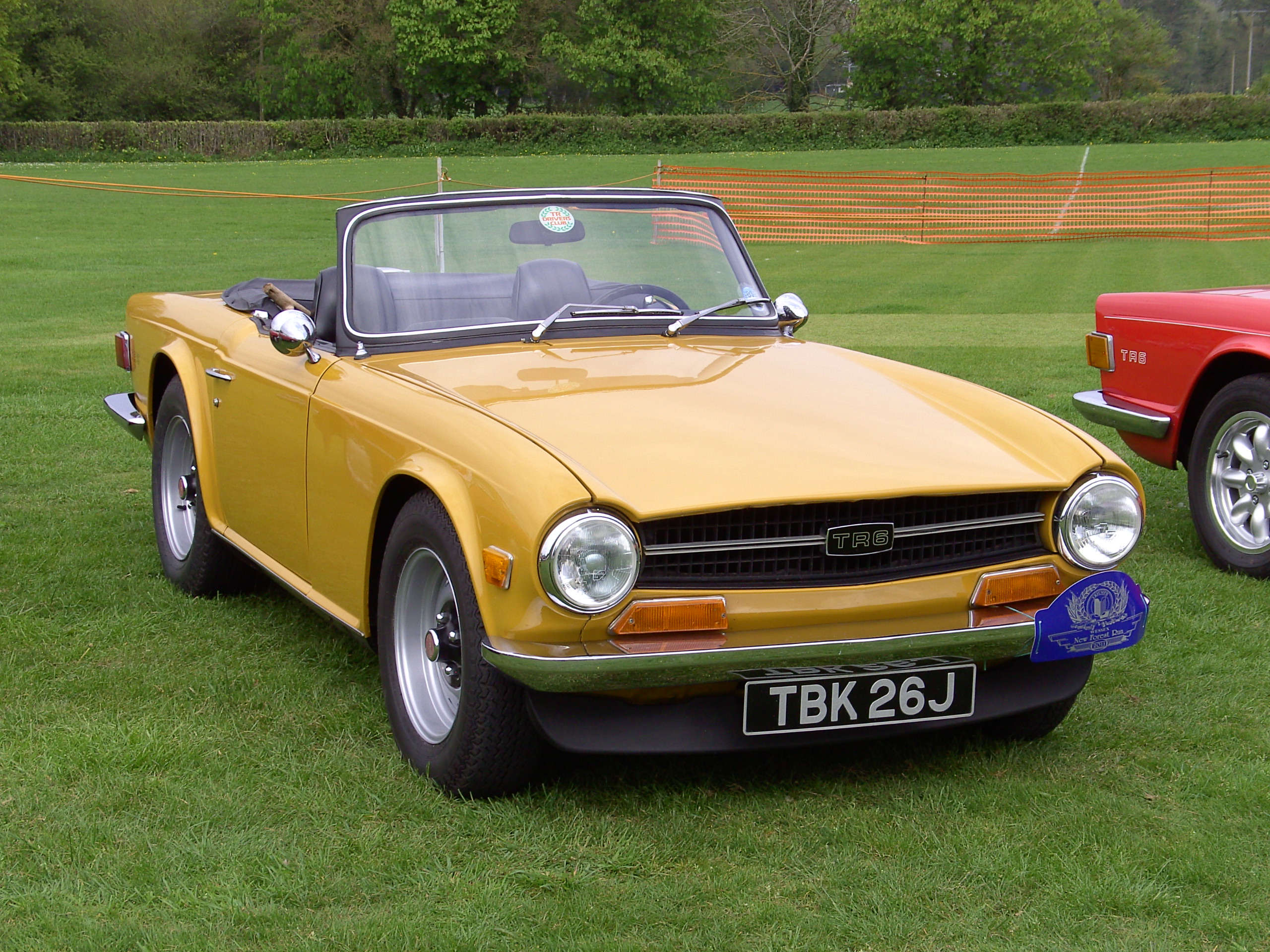 In recent years, the small amount of annual motoring I've been doing in the 6 has been a little unreliable. This is a new situation, for usually it's been very reliable and never missed a beat. Latterly, it wasn't running very smoothly and on occasions would die and then no longer fire. After lots of prodding and poking around the cause was tracked down to be an unreliable ignition system. Having renewed distributor cap, rotor arm, points and condenser, you'd think the job was done. Sadly not. The inferior, modern parts were less than reliable. Even carrying three sets of everything it was still hard to find a combination of old and new parts that guaranteed a reliable spark. Other TR owners kept telling me that it was time to fit electronic ignition, and to stop fiddling with points and condensers. I felt that I should leave it original by conquering the unreliable parts and carrying on. This Spring I finally capitulated, and agreed with general consensus. The unreliability had finally taken its toll and I wanted myTR6 back to normal. I was going to convert to electronic ignition.....

I decided to buy the well known Lumenition Optronic kit for myTR6 - it's a make that's been on my fuel injected TR8 ever since the Lucas setup failed many years ago. Never having fitted an electronic ignition kit before, this was to be a nice challenge, and I found it to be a job within reach of the DIY mechanic. I've broken the job down to show just how straight forward it is!

Parts required are a Lumention Optronic Ignition Power Module and Optical Switch [PMA50] and a Fitting Kit for Optical Switch [FK116], a few male and female crimpable spade connectors and some suitable wire. Finally, a warning. Lumenition Kits come with full instructions; always read [and follow] these using my experience as additional information to help.

The first step after you have disconnected the battery is to mount the Module. Where do you put it? Ideally, you don't want it to be very visible, but equally you don't want it too far from the distributor or in a very hot location. The unit is really a big heat sink of silver alloy, meaning it does get warm and cooling is a factor to consider. I found a reasonable location on the nearside inner-wing. The panel is very curved but there's a pressed flat area towards the bulkhead end of the inner wing - it's ideal for the power module. On my LHD TR6 it's quite nicely hidden by brake master cylinder. The module is fixed with two self tapping screws and the best way to drill the pilot holes is from under the wheel arch - this means jacking the car up and removing the nearside front wheel. Using a cardboard template of the module base will help you to line up the holes to drill. Use a small drill bit to make the holes for the self-tapping screws. Mounting the module was probably the longest part of the whole job, but it's worth taking your time to get it fitted nicely. Secure the power module to the inner wing. Remember to fix the small black earth wire through one of the self-tapping screws. 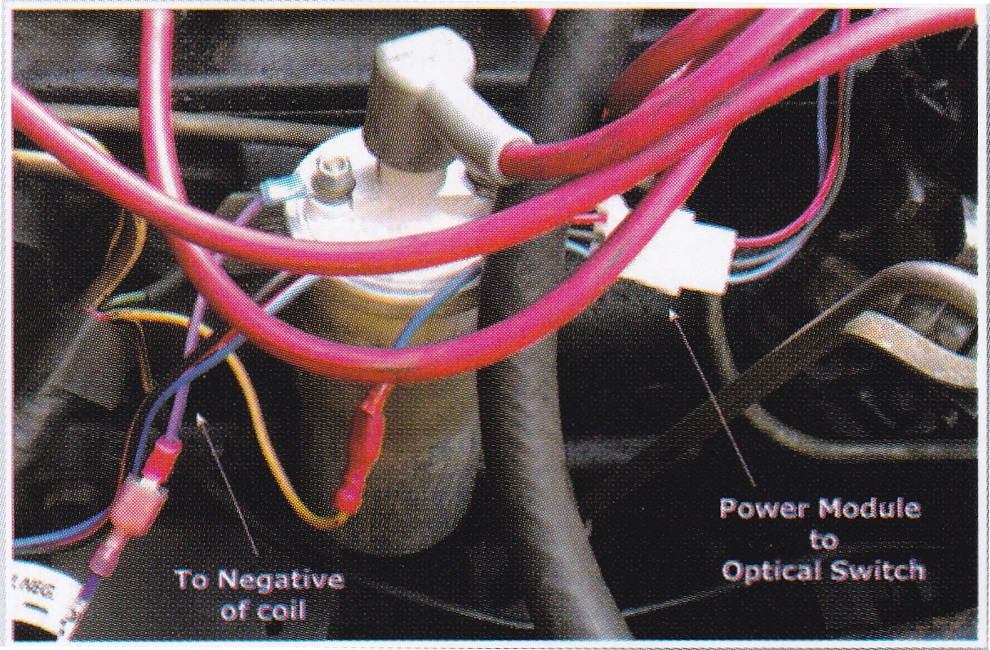 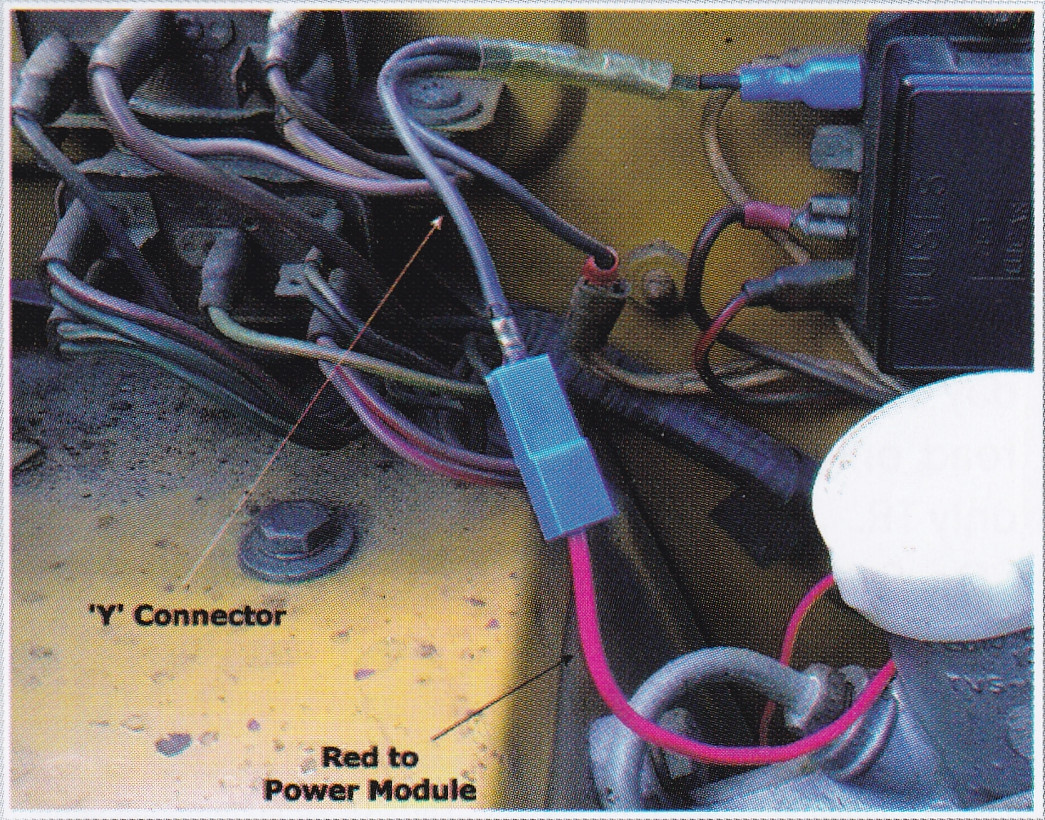 The four other wires that emerge from the bottom of the module are now positioned just above the main engine bay loom, meaning they can follow the route of the loom and allow you to disguise the new wiring. The 12V power supply for the power module. The red wire leads up to the fuse box. It's too short so you'll need to join a little bit of the red extension wire that's supplied in the kit.lt needs to be connected to the feed side of the ignition supply. On my car it's the top one of the three. It has two feeds, both white, and this causes a slight problem. You'll find you have no place to plug in the red feed. I took the decision to create a 'Y' joining cable with two male spades going into a single female spade. This little joiner allows you connect both the red wire and existing white wire to one of the fuse box feeds. In effect you now have three feeds to fuse. Now to route the negative coil feed from the power module to the coil - a purple wire. This cable follows the main loom route along the inner wing towards the alternator and then follows round to the negative of the coil. You may find the cable is a little long but it can always be 'tidied' by shortening to the required length. Secure the purple wire.

Now it's time to fit the distributor kit [FK116]. My distributor is a Lucas 22D, but the kit can also be used for 23D and 25D. Check you get the correct kit for your distributor before removing the cap and rotor arm to access the condenser and the points, along with the cable that links through the distributor housing to connect to the positive of the coil. This is a short cable normally white/black in colour. All these parts should be safely stored just in case you ever want to convert the vehicle back to the original setup! The base plate is now fully exposed, giving the opportunity to wipe clean and check that the advance mechanism moves freely. Fit the optical switch, securing with the screw that originally secured the points. The three wires that run from the optical switch curl around the right hand side of the base plate to exit through the original grommet hole, now vacated by the white/black wire. There should be a new grommet supplied in the kit. Use the tiny tie wrap to secure the three wires to the hole that the original condenser slotted into. This will keep the wires tidy and well away from the rotating chopper. With the wires neatly located, pop the six-blade chopper onto the cam, re checking that the blades are not going to touch either the optical switch or the associated wiring. lf for some reason you find the chopper is going to hit the upper or lower part of the optical switch, you will need to raise or lower the switch by using washers. In my case, it was found to be in a perfect position. Be certain - double check that the chopper is not going to touch anything before refitting the rotor arm and the distributor cap. 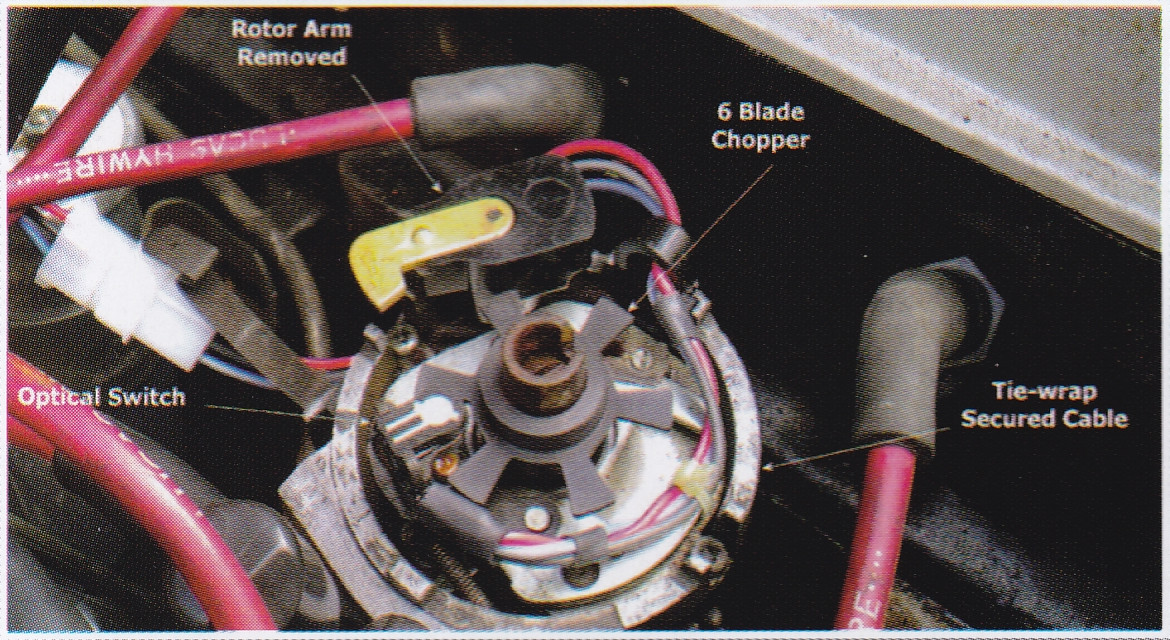 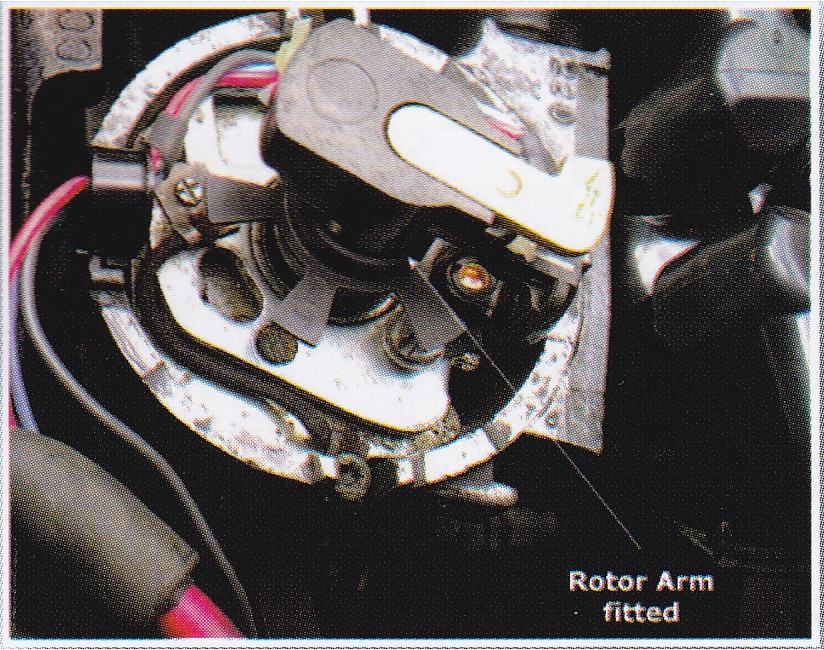 The final part of the installation is to connect the distributor to the Power Module. The male plug housing needs fitting to the three wires from the optical switch. From top to bottom; Red, Black then Blue. Match the male plug to that of the power module, making sure it's the correct way round and that the colours match each other! Before making the final connection check the path of the three wires to the power module, making sure they neatly follow the loom and that there's no chance of any wiring getting damaged by either the fan belt or alternator. Connect the 3-pin plug. It's now ready to test but first ensure that all tools have been cleared away. Whilst the wiring may be in position, it will still be very visible. That's fine, as long as the wiring is safe and connected correctly. Once tested time can be spent disguising the new wiring, so it blends in with the black wiring loom. Finally, reconnect the battery.

Results? It's hard to describe, but for me the results were amazing! The car started on the button with hardly any choke and fired without any delay. On the road, it felt great. There was lots of power and it was very smooth. The fitting of the Lumenition Optronic kit has made a massive difference, it was worth the money and it was incredibly easy to fit. Although I like to keeps things original, this is one modification I would now recommend, it really does make a world of difference.