Way back in the time when Queen Victoria was on the throne, a young man from Germany came to London to see what was what, in search of fame and fortune which was not at all unusual at that time. That he entered into local politics and became Mayor of Coventry was indeed totally unusual. That young man's name was Bettmann. Having arrived in England he held a variety of jobs, and eventually set up a business or businesses as an agent for a considerable number of German manufacturers, a venture which proved unsuccessful.

However, at that time the velocipede, or bicycle, was growing in popularity and our young entrepreneur decided it was time to enter the cycle business, and formed S. Bettmann and Company, cycle manufacturers to the world. However, he had not the first notion as to how to set about developing an engineering company to manufacture bicycles, so with the aid of a local lad from Birmingham by the name of Andrews, he set about the manufacture of said machines, but in actual truth Andrews made the machines for him. He felt that he needed a suitable name for his machines and chose 'TRIUMPH', not only for its hopeful connotations, but also because it was a name likely to be understood in most European languages - a problem often faced today by many motor manufacturers when choosing a name or model for a new motor car.

In 1887 he was joined by a fellow countryman by the name of Schulte who turned out to be a man with ideas of expansion and decided that Triumph should manufacture the machines themselves rather than having them made by Andrews. Subsequently a new manufacturing base was established in Coventry in Much Park Street, but the problems of financial restraint soon caused major problems. This lack of capital caused them to seek help from friends and family alike, and from previous employers, and so the Triumph Cycle Co. was founded. They prospered.

In 1895 Harvey du Cross of the Dunlop Tyre Co. approached them and offered to increase their capital by a considerable amount, and the company was reformed with a working capital of £45,000 which was a considerable figure at that time. Several experiments into the manufacture of powered cycles or motor-cycles followed, but these efforts died resulting in more than a few rows in the boardroom. At that time, with the aid of Bettmann's connections, a machine was produced using a Belgian engine manufactured by a company named Minerva, but in true Schulte tradition some two years later in 1902, Triumph were manufacturing their own 3 hp unit and the Triumph motor cycle was at last in production.

At first few were sold, but in 1905 the number of machines sold rose to just over 500, which allowed for some considerable expansion. Interestingly enough, the founder of the Standard Register found evidence to suggest that for a short while in and around the year 1911, Bettmann was chairman of the Standard Motor Co. which as we know purchased the Triumph Company some thirty-five years or so later.

At the outbreak of the First World War, the Triumph motorcycle was very well established and production figures were better than expected. During 1914 Bettmann met the son of a newspaper proprietor by the name of Claude Vivian Holbrook, who at that time was working at the war office. This meeting resulted in the shipment of 100 machines to France and the machine quickly become known as the 'Trusty Triumph'. Following on from the initial order, a further 30,000 machines with a 550cc engine were supplied to the services during the course of the war, to be used by dispatch riders. This made, of course, a tremendous war time business for the company, which at the end of hostilities resulted in substantial reserves of capital.

Unfortunately what become known as 'Armistace Day' for the allied forces did not apply to the Triumph board room as Bettmann and his long standing partner Schulte were about to part company. The problem was that the fire of ambition still burned in Bettmann's veins, whereas exactly the opposite applied to Schulte who was encouraged to retire. Schulte did so, taking with him an extremely attractive golden handshake at the time of £15,000. At this point, Holbrook (War Office chap) who had become a Colonel, returned to the scene, and Bettmann having been so impressed with his performance, persuaded his board of directors to appoint Holbrook as company manager.

Holbrook was an extremely adventurous man for whom the fire of ambition burned strongly. He was keen to use some of his funds accumulated during the war to branch out into the business of making motor-cars. Bettmann was rather reluctant to risk damage to the by then profitable motorcycle business but he had not reckoned with the persuasive nature of one Claude Vivian Holbrook.

Holbrook persuaded Bettmann and the board to allow him to develop the motor car side of the business. There was not sufficient room in their existing premises to allow further development and this, together with the still reluctant Bettman, delayed the arrival of the first car for some considerable time. An experimental car was built in 1919, which continued through to 1921 .The Autocar magazine announced in 1921 that the Triumph Cycle Co. was interesting itself in the development of a light motor car. 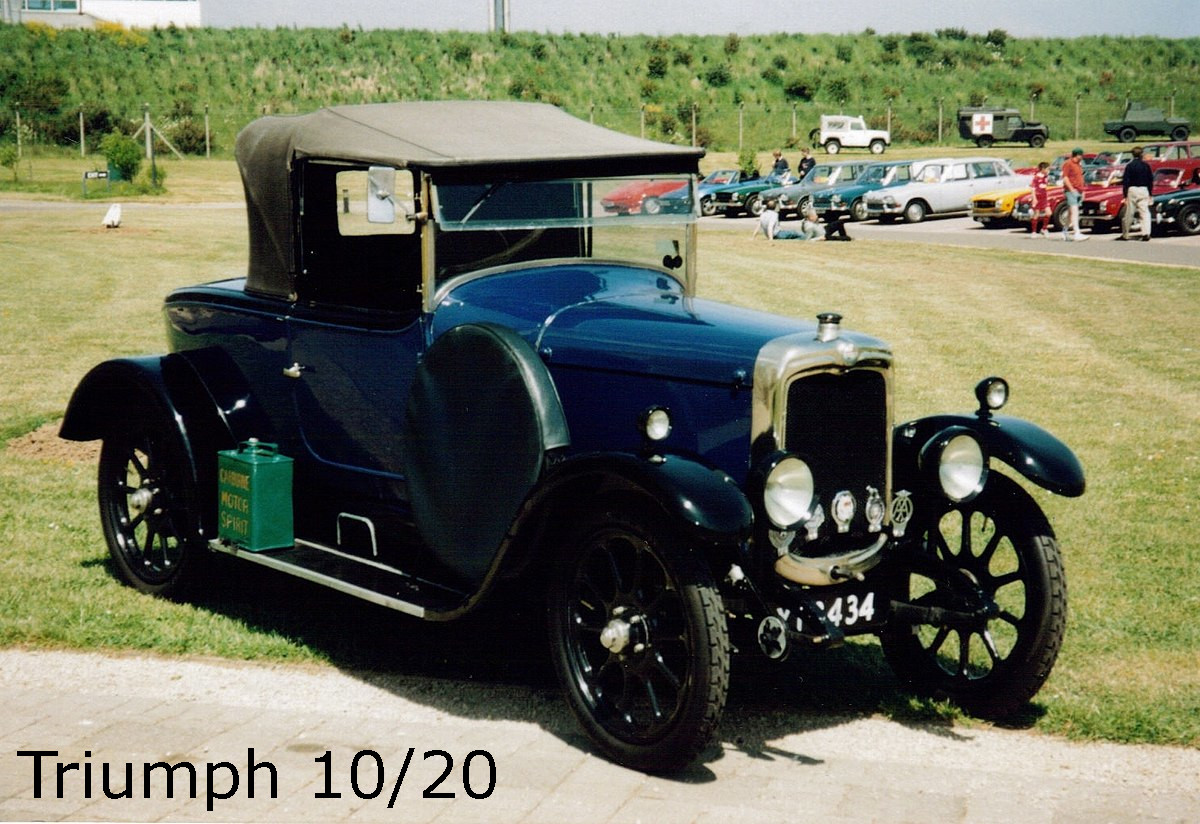 In order to further develop the car, the company bought the Clay Lane works of the then defunct Dawson Car Co. As at that time new car companies were appearing like bees round a honey pot and were being gathered in by the Official Receiver almost as quickly, which was still a concern of Bettmann. However, the first Triumph car appeared in April 1923, and was named or known as the 10/20, which was a common configuration of numbers at the time being compounded of the fiscal RAC horsepower of the engine and the actual brake/horsepower developed by the engine.

The engine of the car was designed by Harry Ricardo, who worked for the company and had previously designed a four valve head motorcycle unit for Triumph. The rest of the car was designed by a contract design engineer by the name of Alderson who was employed by Leo Francis, at the time. Despite the interest in Ricardo's engine which employed 'slipper' pistons and a considerable number of items of advanced technology, for the time, the car was said to be pretty dull and ordinary and very similar to many other cars built in Britain at that time.

In those years immediately after the war, in order to become a motor manufacturer, all you needed was a large shed or barn, a fairly innocent and generous Bank Manager, a small and willing workforce, and a reliable source of component suppliers. Depending upon how well you made your product, really resulted on how it was received by the buying public and established your place in the market. But as said previously, at that time motor car manufacturers came and went with the tide. As it happened, the Triumph was well made, with the bodies being built by a London company called the Regent Carriage Company.

The prices of these cars were between £400 and £500 depending upon specification which did not compare at all favourably with the William Morris vehicles, named Oxford and Cowley, which were both priced at around the £200 mark. 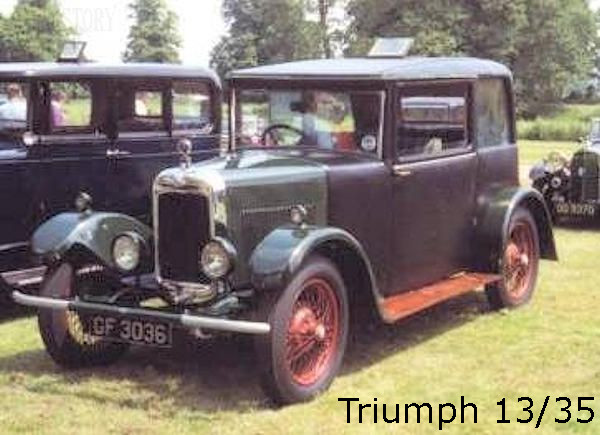 Whilst the standard of workmanship was said to be excellent and the only major selling point, performance was at the bottom end of acceptability, economy was reasonable and reliability proved to be excellent. In general terms, however, the car was worthy, dull and respectable and unlikely to set the world alight, but it was a beginning.

And then later that year, a two-seater sports car was produced in an effort to attract the younger market. Based on the 10/20, with a lightweight body, wire wheels and higher gear ratios, which, together with the new 13/35, announced at the 1924 motor show, was also based on the 10/20 and having an 1873 cc engine. This car has a genuine claim to fame in that it was the first British production car to be fitted with Lockheed hydraulic brakes. Everybody else's car had cable operated brakes. Suddenly the Triumph Car Co. took off. It had a two-seater sports car which appealed to the 'yuppy' market and a marginally larger, more luxurious, slightly more expensive saloon car which appealed to the middle class market looking to buy a decent British car.

And the rest is history!
Steve Divall