When the TR2 was launched it looked quite modern compared to the MG TD, however when the TR3a was introduced it faced stiff competition from the modern looking MGA. When it became known that MG were developing the MGB, Triumph decided to let Giovnni Michelotti design a new body shell, similar to the experimental Zest to fit on a modified TR3a chassis. The new TR4 is often unjustly called a re-bodied TR3A but there were differences such as a wider track, rack and pinion steering, all synchromesh gearbox and standardization of the 86mm bore engine. But mechanically it was still very much as before. 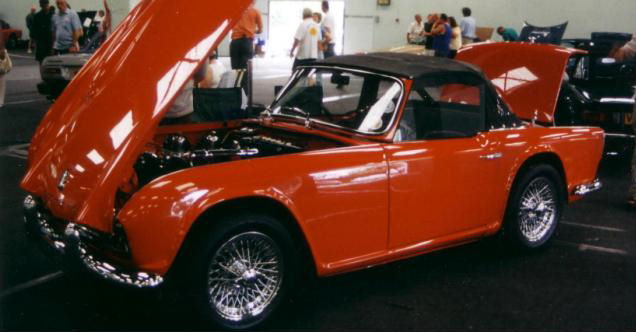 The increased front and rear tracks (49" and 48") were accommodated by stiffening up of the front end, repositioning of the front suspension towers and extra members alongside the front main side members.

The old cam and lever steering was discarded in favour of rack and pinion similar to that fitted to the Triumph Herald. Many early TRs have been retro fitted with this system; indeed there are even kits available to enable you to fit the later steering as it improves the feel and weight. However, some believe that the fitment of rack and pinion spoils the early cars.

Other principal mechanical changes were to engine and gearbox. The 86mm x 92mm 2138cc engine was standard where it had been optional on the TR3.

Whilst the TR3A gearbox appeared to be similar to the TR4's, it's impossible for a TR3A box to be converted to TR4 specification as the gear casing is different, although many parts were carried over - the main difference being the introduction of synchromesh on bottom gear.

The body style was the most obvious change, the old TR3 shell was built in the Triumph- owned Mulliner factory in Birmingham, whilst the pressed shell of the TR4 was assembled at Standard Triumph's new Speke plant in Liverpool. Like the earlier cars the shell was pressed steel but the bonnet and grille were both full width, the bonnet hinging at the front and was closely shaped round the engine, hence the bulge to clear the carburetor tops.

The most important development were the wind-up windows that replaced the cutaway for the driver's \ passengers elbow and the side screens . The old instruments styling and function remained in the new fascia and the seats also remained basically the same. As a result of the rear deck no longer sloping the boot space became larger, but the spare wheel no longer lived in its own compartment, being slung in a wheel-well between the chassis legs at the back. Many familiar options were carried over from the early cars, things like overdrive gearboxes, wire wheels , and different axle ratios. However, the new hard top was very different - and unique - for its day, pre-dating Porches similar Targa Top. The new hard top came in two pieces, the rear part was made of alloy and able to act as a roll bar in case of accident whilst the middle part was a separate steel panel, this new top was known as a Surrey Top. Instead of the middle panel being steel an option was available - a light weight metal frame covered in vinyl.

Other advances were the steering column safety collapse feature, a fresh air heater and vents at each end of the fascia (pre-dating Fords better known system by several years). A brake servo system was also available if required.

The TR4 sold well from its launch in autumn 1961 and although heavier than the TR3A, it's bigger engine and better gearbox etc made it easier to drive. As the cars were being produced improvements were made to the specification.

Starting with commission number CT4388 (disc wheels) and CT4690 (wire wheels) a new front suspension geometry was introduced, recognized by the smooth shape of the top wishbone pressing. The definitive TR4 braking system was introduced giving smaller, lighter Girling 16P calipers, although the rear brakes remained the same. The front brake pad size was also reduced without impairing performance and this system was satisfactorily used on later and faster TRs.

Winter 1962-63 brought about further improvements. On - and after - body no.15076CT definitive TR4 seats replaced those that had been carried over from the TR3A. These new-style seats had an entirely new frame design with flatter cushions and squabs, and this style remained with the TR until US legislation necessitated another re-design.

Motor politics influenced another major change with the Zenith-Stromberg 175CD carburetors replacing the HS6 SUs fitted since 1955. Strombergs method of operation was identical to the SU - with both operating the constant vacuum principal with a moving piston lifting a needle out of a fixed central jet. Strombergs introduction of this carburetor took place on the expiry of SUs master patents.

With the new carburetors came a new inlet manifold improving the air flow between the carburetors and the cylinder head but the power and torque remained the same. Both types of carburetor and manifolds can be retro-fitted to any engine as they use the same mountings.

In 1962-63 - before the complete switch was made in summer 1963 - Strombergs were fitted to a few cars. The first production engines to be fitted with these carburetors were numbered CT16801 to 16900, and they became a regular fitment from CT23594.

The TR4 had a placid, successful life. It was seen as an interim model, a replacement for it was already on the design board. After 40,000 TR4s were sold it was replaced by the TR4A.