Problem 1. Bonnet will not open and bonnet release cable will not fully pull to its normal release length of about 25mm. The Bonnet release cable sheathing as been trapped with the removable Air intake chamber (Plenum) which fits to the bulkhead. This was most likely removed/refitted prior to bonnet being closed.

Solution 1. A good torch is required to shine on to the bonnet release assembly. This is to allow you to see the movable post slider on the bulkhead catch, which requires pushing towards the fixed anchor post. This is achieved by using a long narrow screwdriver inserted through the bonnet centre grill, taking care not to damage the paintwork. Remember to release the trapped cable from Air intake chamber before closing bonnet. For total peace of mind, fit a suitable sized P Clip holding the bonnet release cable clear of entrapment in the future. 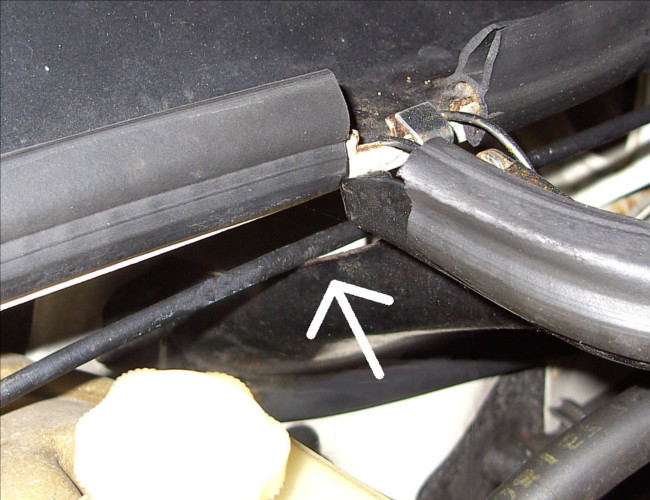 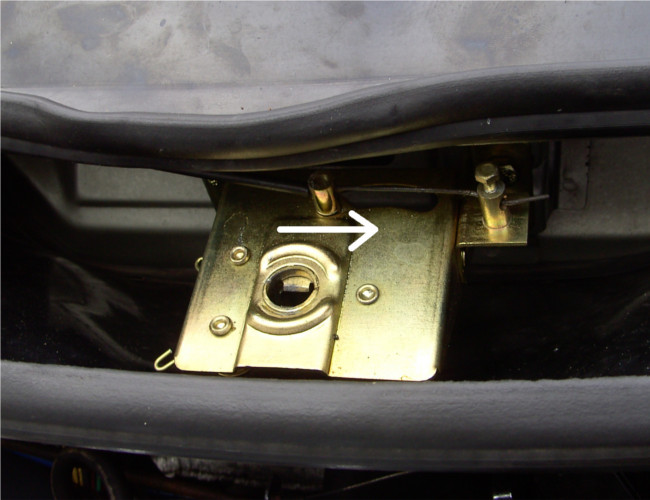 Note:- On Left Hand Drive cars the layout is reversed.

Solution 2. This requires the gentle removal of the centre rubber strip fitted to the lower windscreen bottom tray lip which forms a seal to the underside centre of the bonnet. You will see that the tray lip has been lowered, from the centre cut out to allow access of a ring spanner. I have also noticed that the lowered cut length is shorter on the early TR7 cars and is twice as long on the later cars allowing more rotation of the spanner. This is to gain limited access to the under side of the bonnet plunger fixing bolts 13mm, which holds the assembly to underside of the bonnet. You will require a 13mm ring spanner which has an angle shaft similar to the profile of the windscreen and the spanner may require bending slightly upwards to achieve the correct profile. With use of a good torch plus trial and error you will locate the spanner onto the bolt head - see 'A' below. Un-tighten the two 13mm bolts turning the spanner clockwise looking from above. This will release the tension/misalignment problem, locking the bonnet shut closed. To assist this slow process I recommend you fit two/three cloth pegs as appropriate to keep the bonnet release cable fully open. At intervals, whilst un-doing the two bolts, the bonnet should be pulled gently upwards, without any sideways movement, to try to release the trapped plunger. This will save completely removing the two bolts. Members with early cars not worried by total originality can lengthen lowered lip to avoid possible future troubles. 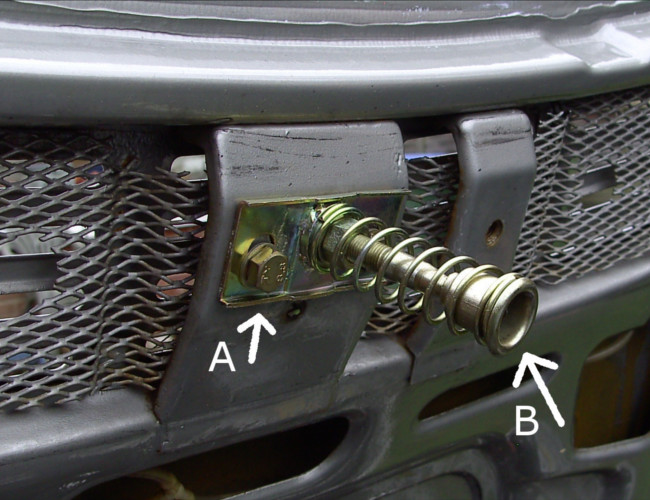 Proposed trouble free alignment process.
On my TR7 the best solution in fixing this above problem was to leave the clothes pegs holding the bonnet release cable out and by removing the bonnet plunger spring/end cap -see 'B'- this gave a better view of plunger entering the catch hole. This allowed me to see the required direction to move the bulkhead or catch plunger assemblies to give the best trouble free movement in the up/down direction without catching the n/s or o/s of the hole. After achieving this good alignment, refit the spring/end cap. Finally the plunger length will require adjustment to eliminate free movement of the bonnet and a good process is to start too long and gradually reduce the bonnet movement.