Fitting a Kenlowe Electrical Fan to a TR7 2 Litre

If like myself, you have had a couple of standard Viscous Fans fail on your TR7, you will find that locating a good used unit at a reasonable cost is very difficult, therefore you may wish to consider fitting an Electric Fan to your Radiator as I have done.

The fan is mounted on front of the radiator; the TR7 kit includes fan, thermal control unit, sensor unit, and fittings/basic instructions. You will additionally require a 12V 32 amp relay, a short fan belt (enabling you to remove the old fan assembly from the front of the engine and save a few bhp) and a Fuse holder. The relay is a standard 32 Amp Spotlight Relay, and the fuse holder is a standard inline fuse unit available at all motor factors. Use a fuse to match the ratings of the fan.

For piece of mind, I also fitted a "Fan on" light and an override switch to the centre console allowing me to see when the fan is operating, and which also gives me the ability to operate the fan manually. The switch is a standard on/off switch; the light is a simple dash mounted light available at all motor factors.

Slacken of the fan belt and remove the belt, then remove the fan and pulley assembly from the front of the engine, this is held on with 3 bolts. Fit the short fan belt over the alternator and crankshaft pulley, and then adjust the tension.

I mounted the Thermal Control Unit on the light panel next to the right hand side of radiator with the bracket supplied and self tapping screws, and then mounted the Relay next to this; again a bracket is generally supplied when buying the relay. 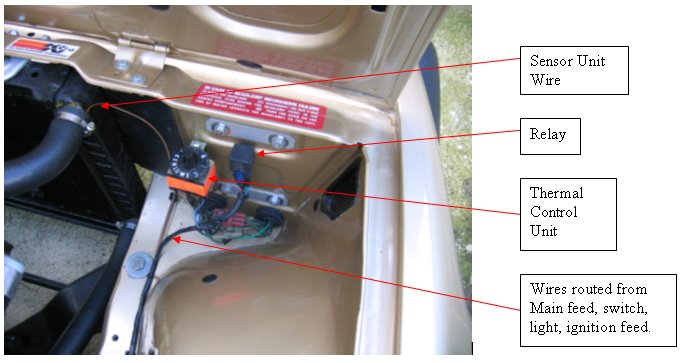 Next remove the top radiator hose, put the sensor unit in the opening to the radiator with the tip just in the opening, not right inside the radiator, and carefully bend the sensor wire back on its -self, fit the rubber Pad over the wire, and refit the top hose, I always use a gasket sealer around the hose. Carefully coil up the excess Sensor Probe wire to make it look tidy. 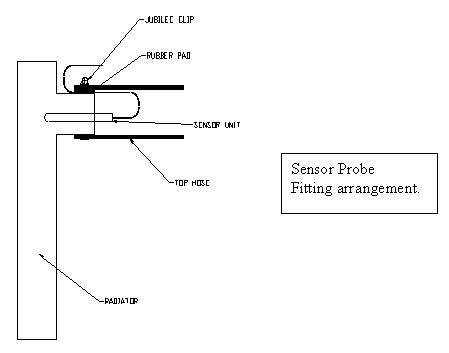 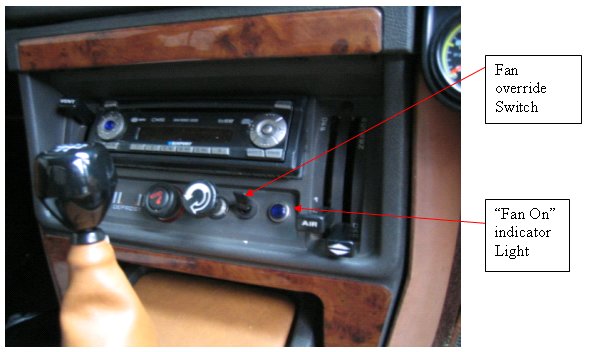 The fan, which is a pusher fan, is mounted to the front of the radiator using special cable ties, which are very carefully pushed through the fins, and then a special clip is applied to the back and pulled tight. It is easier to do this when the radiator is off the car. When the ties are tight cut of the excess.

The positive feed from the battery can be picked up from the large connector block on the battery positive lead in the engine bay, near the battery, where there is a spare terminal; a large female spade connector is required. 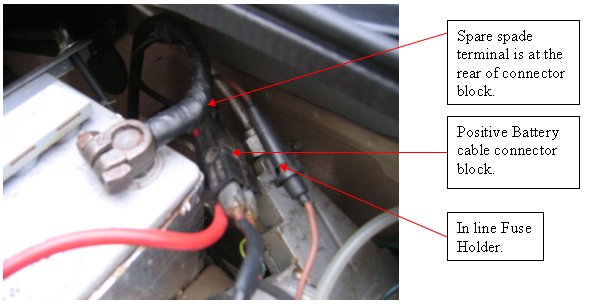 This wire can then be routed into the car via the large bulkhead wiring loom grommet behind the battery, then across underneath the fuse box, behind the heater, under the instrument panel, and back into the engine bay via another bulkhead grommet, then down to the relay and connected to the relay 30 terminal.

The switched feed is picked up by breaking into the white wire from the rear of the ignition switch, (if in doubt consult your cars specific wiring diagram in Haynes or Leyland manual) thus when the ignition is switched off, the fan is also switched off. This wire is routed into the engine bay to the relay terminal 86.

Run a wire from the Thermal Control Unit NO terminal to the relay terminal 85.

Run a wire from the Thermal Control Unit C terminal to the nearest earth terminals.

Tidy up all the wiring, making sure all wires are securely clipped and bound in insulating tape. Ensure no bare terminals are exposed, and ensure you cannot catch any wires under dashboard with feet.

Connect the battery, then check the operation of override switch and "Fan on" light, and ensure fan runs OK and is pushing air through the radiator.

Turn down the Thermal Control Unit to lowest setting.

Ensure all hoses and fittings are secure and tight.

Ensure coolant system is filled, and that there are no air locks, or water leaks.

Run engine until the Thermal Control Unit cuts in and starts the fan, then check "Fan on" light operates.

With engine running, ensure that fan runs until engine cools down, then check that when temperature is again at fan operating point that the fan will consistently cool the engine. 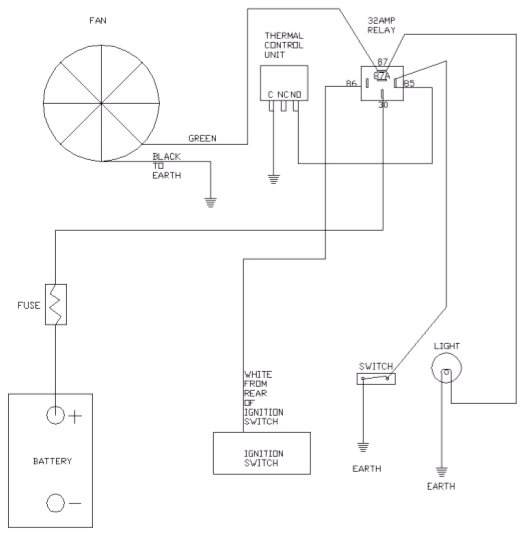